Editor’s Note: The Whiskey Wash welcomes noted bourbon history and writer Michael Veach as a contributor to our writing team.

Maker’s Mark takes great pride in the fact that they’re willing to go against the norm and set new standards. They did this in the 1950’s when they opened a distillery to make a single brand of premium bourbon, and recently they did it again with their new single barrel selection of Maker’s Mark 46. I had the honor of being part of the selection team for a barrel for the Party Mart stores in Louisville, Kentucky.

The day starts with coffee and bagels at Party Mart as the van picks up the team to make the selection. The team consists of Susan Reigler, Carla Carlton, and myself as Party Mart’s “Bourbon Board of Directors.” We routinely select private barrels for the store together. Joining us on this trip is Renae D. Price filling in for Jerry Rogers. Adam Mendoza from Beam Suntory is our driver and Rick Gibbins from Southern Wine and Spirits is also along for the tasting.

This brand-new single barrel program is more than a simple pick-a-barrel-of-good-bourbon exercise. Traditionally, multiple barrels are pulled and a panel tastes the contents of each to decide what they want. The purpose of this new program at Maker’s Mark is to allow participants to actually build their own flavor profile for a barrel of Maker’s 46 by choosing among five different types of staves used as inserts in a finishing barrel.

Maker’s Mark is the farthest major distillery from Louisville, and we arrive around 10:30. We’re taken to the new visitor’s center and shown to a private tasting room on the second floor. Here Jane Conner and Scott Mooney have the room set up for the tastings.

In front of each taster is a mat with five glasses of bourbon, with three additional empty glasses for later. The glasses are cryptically marked: P2, Cu, 46, Mo, Sp. Next to the mat and glasses is a booklet titled “Maker’s Mark Private Select,” as well as a Maker’s Mark pen. The booklet begins with an introduction from Rob Samuels, which is followed by 11 pages of information about oak, how it is cured for coopering, and the flavors found in the wood. It’s great information before you even start getting into specifics. 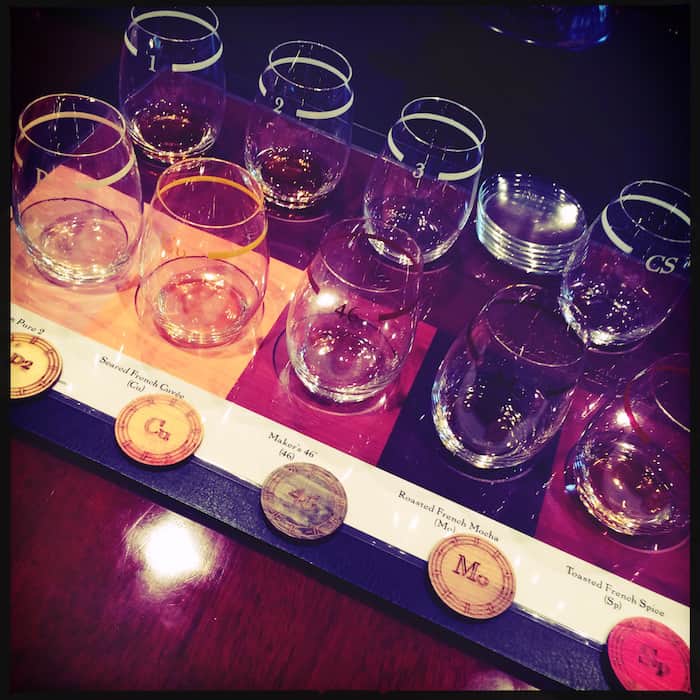 On the mat, there is a glass of cask strength Maker’s Mark (what will enter the customized barrel) to taste as a baseline. The other five glasses contain bourbon finished with each of the different wood options. All are barrel proof, as the final product will also be barrel proof.

After careful tasting, our next object was to blend these different woods to come up with our own custom version of Maker’s 46.

Look for the next part of this story soon on The Whiskey Wash where I finish describing the lengthy process of choosing the finish for a private barrel of Maker’s 46.  Until then you can read my blog at bourbonveach.com or find me on Twitter @bourbonveach.