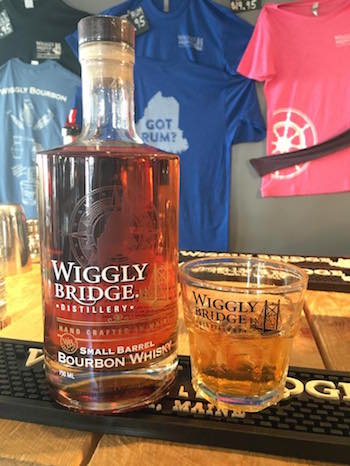 There is a trend among craft whiskey makers, for better or worse, to go the small barrel route in an effort to try and get a product out to market sooner. This tends to work well only if the distiller keeps careful track of the quicker aging going on in these less-than-full-size containers. One distillery in Maine seeming to be doing this right is Wiggly Bridge, a young outfit whose bourbon recently became available outside of the state.

The Wiggly Bridge Bourbon, according to the distillery, has been aged “for 10 months in smaller than traditional sized barrels.” It is bottled at 96 proof after aging. As for the distillation process, it is said to be distilled from a sour mash recipe on a homemade 60 gallon copper pot still Wiggly Bridge’s father and son founders Dave and Dave II Woods built themselves.

As for the backstory of the Woods, they apparently got into the idea of making their own whiskey, among other sprits, over a family dinner in which someone joked about making their own spirits. This evolved into research and actually development of the distillery itself. Wiggly Bridge is apparently named after a nearby, quirky little bridge that is itself reportedly named as such “from a girl scout troop who said it ‘wiggles’ as they walk over it.”

Should you choose to seek out a bottle of Wiggly Bridge’s bourbon, expect to pay around $60 for a 750 ml bottle. It won an award at the American Craft Sprits Association judging last year, by the way, which is why it might be one small barrel offering worth considering if you are out to do a little experimenting.