Editor’s Note: There are many bars in America and beyond where you can get whiskey, but only so many which have a whiskey collection that goes well beyond the ordinary. We highlight these in an occasional series called Legendary Whiskey Bars.

It’s no secret that we here at the Whiskey Wash have a love affair with whiskey. From malted Scotch to smooth bourbon to the classic American, we crave the supple aroma and sharp taste of this brown elixir. Recently, I discovered a location that seems to have as much of an appreciation of whiskey as we do. It’s called the Seven Grand and it is located in the heart of downtown Los Angeles.

Nestled within LA’s bustling Jewelry District, this bar is very unassuming from the outside. It would be just as easy to pass by it accidentally if you didn’t know what you were looking for. Subsequently, the bar itself is centered on top of another bar (one that specializes in tequila), so you have to trek up a flight of remarkably steep stairs. However, assuming that you haven’t run out of breath at the top, you’ll be welcomed into a comfortable, rustic setting where you feel as if you’ve stepped back into frontier times. 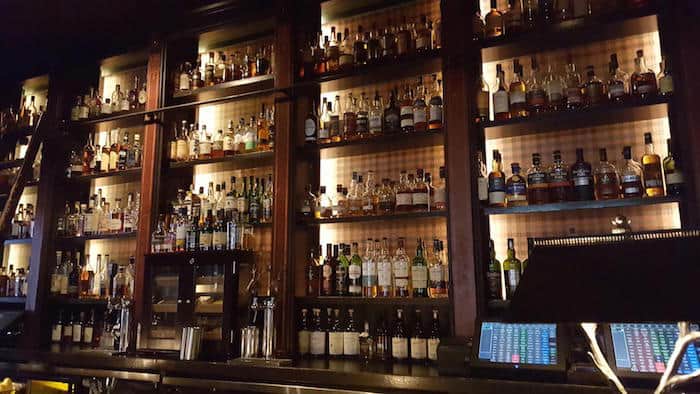 Started on Derby Day in 2007, the Seven Grand has quickly become the premiere location for all things whiskey in the area. They boast a total of 700 varieties from all different countries. While it would be a foolish attempt to try and tackle all 700 in one sitting, I decided to partake in the few that are signature to the location. Behind the bar was a very knowledgeable and friendly bartender by the name of Mitchell. In keeping with the rustic flair of the place, he was adorned with suspenders, plaid shirt and a healthy beard, seeming like he would be as much at home felling timber as he would slinging drinks.

Through Mitchell’s guidance, I was treated to several of the bar’s luscious libations. A whiskey sour, an Old Fashioned (seemed fitting) and a tasting of two of their proprietary liquors. The first was a variation of Knob Creek that is only sold at their location, and finally a drink by the name of Fighting Cock. Name aside, I was informed that it would no longer be sold after their reserves ran out, so I decided to try it while I still could.

According to Mitchell, the Seven Grand prepares a Whiskey Sour in their own unique, and far superior, way. Most places will mix a shot of whiskey with some sweet and sour and call it a day. Here, however, they take the time to craft something that is much smoother and much more drinkable than your average Sour. They use egg whites (I know, it’s not as off-putting as it sounds) to remove the tannins from the whiskey to reduce the sharp edge, creating a soft, pleasant cocktail. 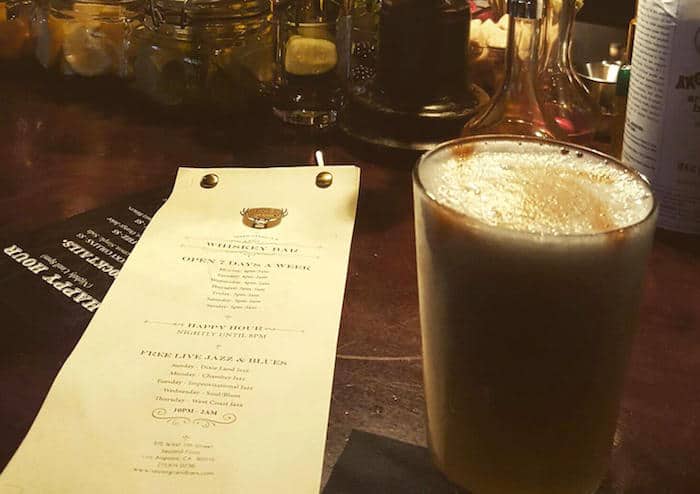 As for the Old Fashioned, they prepare in a way that can only be described as, well, old fashioned. It came with an intoxicating aroma and a sweet, silky finish. So far, we were two for two. Finally, when it came to the spirits themselves, they did not disappoint. We began with the Knob Creek, which comes with its signature “Seven Grands” label, so you know that you can’t get it anywhere else.

I’ve had Knob Creek before, but I’ve never been a huge fan of it. Thankfully, the Seven Grand variation was an improvement. It had a smoky bite to it, with a sweet aftertaste. After a few sips, the sharpness subsided and it proved to be a worthwhile tasting. Finally, the Fighting Cock showed up. Having never experienced a Fighting Cock before, I wasn’t sure what to expect, but it had a rather smooth finish to it, with a hint of aromatic sweetness. Overall, I could understand why their supply was running low.

Unfortunately, I didn’t have the time nor the constitution to continue taste-testing, but I shall continue upon my next visit. For those of you who want a more formal trial, the Seven Grand hosts tastings nearly every day from 8 pm to 1 am. You can purchase spirits individually, and their resident whiskey connoisseur will guide you through the process. Considering the number of drinks they have on hand, one could presumably come every day and never try the same thing twice. That, coupled with the fact that their stock regularly rotates (they print a new list each month), means, presumably, there will always be something new to try.