Texas-based whiskey label Oak & Eden, as we’ve discussed in the past, is all about so called “in-bottle finishing,” where the brand places “a 5” long spiral-cut piece of wood, called the Spire, into their fully-aged bottle of whiskey, imparting new flavors and characteristics to the whiskey that wouldn’t be achieved in a single barrel alone.” They’ve recently announced their latest expression, a bourbon finished with a piece of wood previously soaked in cold brew coffee.

The new Oak & Eden Bourbon & Brew, according to those behind it, takes the brand’s bourbon (with a mash bill that’s 60% corn, 36% rye, 4% malted barley) and finishes it inside the bottle with “a French Oak spire that had previously soaked in West Oak Coffee’s Delagua Colombian cold brew coffee, giving a delicate, sweet, dark chocolate & coffee finish, unlike anything else.”

West Oak Coffee, for those unfamiliar with it, is a Texas-based craft coffee purveyor known for “supporting and paying above fair wage to coffee farms throughout Colombia, Thailand, Guatemala, Nicaragua, Indonesia, Burundi, and El Salvador.” 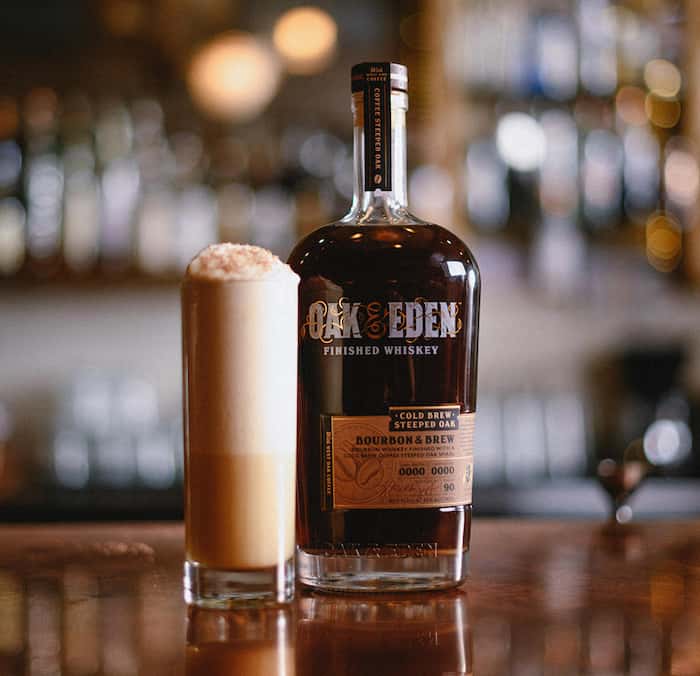 “Bourbon & Brew puts an entirely new twist on the marriage between coffee and whiskey,” said Joe Giildenzopf, cofounder and CEO of Oak & Eden, in a prepared statement. “Where most are familiar with coffee liqueurs, or alcoholic coffees, Bourbon & Brew is a bourbon with a delicate dark chocolate, candied fruit, and of course, coffee finish.

“We are so proud of this release and extremely humbled to have received a Gold Medal at the industry’s most revered spirits competition, San Francisco World Spirits Competition. We couldn’t imagine receiving better validation to our in-bottle finishing technique and the robust, flavorful spirit it produces.”