The Buffalo Trace experimental whiskeys have been something of pride for this Kentucky distillery, with this ongoing line up now pushing over 20 one-off releases since it began back in 2006. There’s plenty more likely ahead as well, with over 22,000 experimental barrels of whiskey aging. Now, for their 22nd experimental release, the distilling team there has debuted two bourbons aged for more than nine years in barrels made from oak staves seasoned for three and four years.

These bourbons, according to those behind them, were filled with Buffalo Trace’s mash recipe #1, and then put away to age on October 27, 2009 in new barrels with staves that were seasoned for 36 months and 48 months. Most barrel staves air dry for six months, but these oak staves were allowed to season for much longer in hopes the barrels would offer a unique flavor, different than standard barrels. 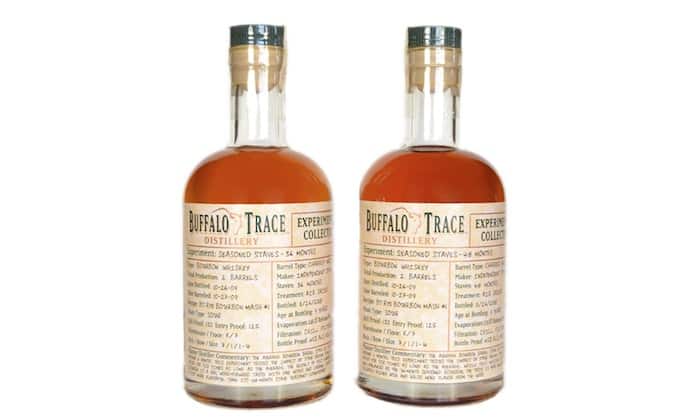 “Although the taste difference is slight between the two experiments, these whiskeys taste different than our flagship Buffalo Trace bourbon,” said Buffalo Trace Master Distiller Harlen Wheatley in a prepared statement. “The 48 month seasoned stave barrels created a more mellow taste and holds less flavor from the wood. The 36 month seasoned stave bourbon is a little more flavorful with oak notes and caramel present.”

Plans call for these experimental whiskeys to be sold in a two pack case, so consumers can evaluate the two and compare taste differences for themselves.  Each bourbon has been bottled at 90 proof, and the set as a whole prices around $46 for two 375 ml bottles. They will see limited retail availability starting this month.

629
Shares
6.9k
Views
Share on FacebookShare on TwitterGet Our Newsletter
Read More Whiskey News
Whiskey Review: Green River Distilling Kentucky Straight Bourbon
Cheers to the Dads! Personalize a bottle of his favorite whiskey to create a modern gift for the modern man. Use code: FATHERSDAY20 for $20 off your next order of $100 or more at ReserveBar