New Knob Creek 2001 Bourbon Over 14 Years In The Making 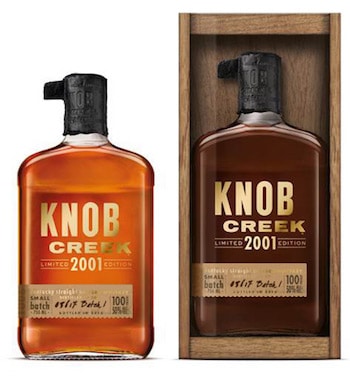 The Beam Suntory folks, through their Jim Beam distillery in Kentucky, have been quite busy of late pumping out the more premium expressions. We’ve seen just in the last month the second 2016 batch of Booker’s Bourbon and also the super rare Booker’s Rye. Knob Creek, another one of Beam’s small batch brands, is also getting the limited release love in the form of Knob Creek 2001 Limited Edition Bourbon.

Knob Creek 2001, according to information provided to us by Beam Suntory, was started back in the namesake year by legendary Beam master distiller Booker Noe. He is said to have passed the love of Knob Creek bourbon to his son Fred Noe, making this particular brand his first assignment. The 2001 expression was carried forth by the younger generation Noe through until recently, when it was bottled up into three batches which each accentuate “distinct notes” of the release.

12,000 bottles, each clocking in at 100 proof, have been crafted of this more than 14 year old bourbon. The previously mentioned batches, in general, are said by distillery officials to have a taste with “complex oak and char notes with subtle vanilla and warm spice.” Beyond that, here is how each batch breaks down:

Rounding out the tasting notes, all three Knob Creek 2001 runs have an aroma that displays “robust oak and char notes balanced by sweet vanillas and caramels with a hint of warm brown spice,” and a finish which is “smooth sweetness with a touch of astringency.”

Knob Creek 2001 is set to be released this month alongside the two Booker’s offerings, with a price point of $130 per bottle. It probably won’t go as fast as the Booker’s Rye, but will likely still do well at retail for Beam Suntory.

1.3k
Shares
829
Views
Share on FacebookShare on TwitterGet Our Newsletter
Cheers to the Dads! Personalize a bottle of his favorite whiskey to create a modern gift for the modern man. Use code: FATHERSDAY20 for $20 off your next order of $100 or more at ReserveBar