Joseph A. Magnus Embraces Its History With A Move To Michigan

Joseph A. Magnus & Co., known for their high-end, award-winning bourbons and dry gins, recently announced they are moving operations from Washington, D.C. to Holland, Michigan. And it’s a return home, in a way.

The Magnus brand was originally founded in 1892 in Cincinnati, Ohio, and re-established in 2015 in Washington, D.C. But the relocation of Magnus to Michigan reconnects the brand to the legacy of its founder, Joseph A. Magnus, a pre-prohibition distiller who summered in Oden, Michigan and whose presence as a leader and philanthropist was well known in that region. 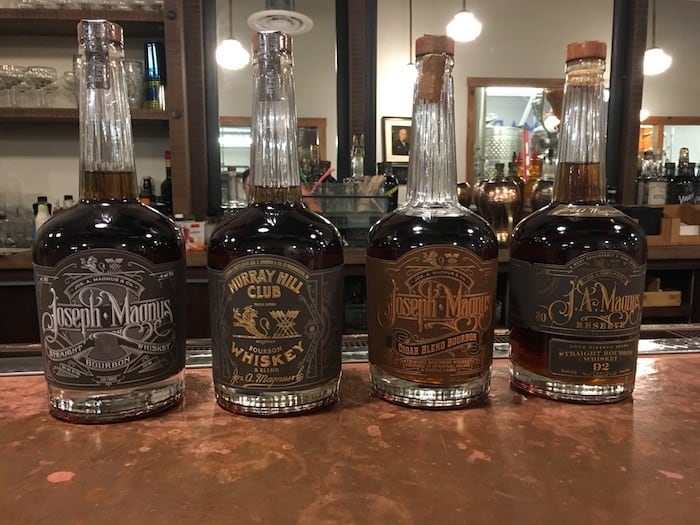 So how will the move to Michigan help the Magnus brand better connect to its past? Magnus General Manager Ali Anderson said that Western Michigan was a special place to Joseph Magnus himself. “As an outdoorsman, he was drawn to Michigan for its rugged bounty; hunting deer and spending winters at the Perry Hotel in Petoskey, while enjoying summers with his family and friends in one of the two homes he built in Oden, Michigan.”

As a businessman and philanthropist, Magnus invested in the community by building a baseball stadium in Petoskey, a pagoda in the railroad park and a boat house in Oden, among numerous other projects. He also donated a tract of land on the shores of Little Traverse Bay to serve as a tourist outpost, which today is known as Magnus State Park.

“Rooted in the place Magnus himself adored, we are honored to bear his legacy of finishing and blending premium spirits for all to enjoy,” Anderson said.

Will the move allow Magnus to reinvent for the future? Anderson said, “Even during Magnus’ time before Prohibition, the brand was continually evolving to offer premium, quality spirits as a trusted supplier to a market that was unregulated and fraught with the adulteration of good whiskey. Magnus created nearly 20 different brands in the early 20th century, some of which we offer today, such as Murray Hill Club and our line of Vigilant Gins. Nearly 130 years later, the Magnus brand of today will continue to honor the past by evolving with contemporary tastes and bringing the very best of what we can create to our savvy fans.”

Having grown in only five years from a small, re-established start-up into a national brand with a sales and distribution infrastructure in 33 states, Anderson said the relocation to Michigan is the next logical step in a journey marked by exceptional growth.

“As a craft brand with the flexibility to adapt to a competitive landscape, the move to Michigan delivers important efficiencies in production, operations and distribution that will enable Magnus to continue to meet pent-up demand for the long term,” he said.

Given an uptick in bourbon and whiskey consumption during Covid-19, Magnus, like so many others, have fought to keep up with demand while retaining their high-end status and small batch persona.

“We shifted operations to scale up wholesale production in early 2019, which required intense examination on maintaining our quality standard at higher outputs,” Anderson said. “With the spike in COVID-induced, at-home consumption these past months, we were fortunate to already be in a position to meet that increased demand and we continue to work closely with Master Blender Nancy Fraley to ensure every single whiskey expression we create achieves the Magnus standard regardless of batch size.”

Anderson discussed the importance of the brand’s relationship with MGP out of the Midwest. “The reputation of MGP’s distillation processes and outputs are well-respected across the industry and very much in line with the quality standard our Master Blender requires, which is why since re-establishing in 2015, we have used and will continue to use MGP’s distillate in our expressions. Our relationship with MGP is part of what makes it possible to continue to flexibly scale production for the future using a variety of aged barrels in our stock.”

And yet, using MGP distillate is just one part of many in a process that takes Joseph A. Magnus expressions from the barrel to the glass. Spirits begin their journey to the glass during fermentation, are born during distillation, and develop character over the next several years in the barrel.

“At Magnus, we excel at cultivating that character into full maturity through the nuanced processes of blending and finishing. We aim to be defined not by where our juice is from, but rather by how we make it remarkable,” Anderson said.

As Magnus relocates to Michigan, the brand’s former D.C. location has been assumed by Bo & Ivy Distillers.

59
Shares
4.6k
Views
Share on FacebookShare on TwitterGet Our Newsletter
Get The Glenlivet 18 Year Old at ReserveBar. Shop now!