The Many Ways Of How Water Affects Whiskey

When discussing how whiskey gets its flavor, wood tends to get most of the credit. However, how water affects whiskey is just as dramatic, playing an important role in determining the quality of the spirit. It’s the reason why most Scotch and bourbon distilleries are located near a river or lake, making it possible for them to use the freshest, most local source.

Phrases such as “fresh spring water” and references to specific water origins are key selling points when it comes to marketing whisky. Sure, the wood is also a big deal, but if, say, a prestigious whisky such as Suntory were to add regular old tap water to its prized Sherry Cask editions instead of sourcing it from one of what they refer to as their water “soulplaces,” the end products just wouldn’t taste the same.

Water plays three major roles in the production of whisky. In the mash process, the grist (grain) is added to warm water to begin extraction of the sugars and become the liquid wort for distillation. Water is also added to the distillate to act as a cooling agent as it leaves the still. Then, (with the exception of cask strength releases), water is added again after cask maturation to bring down the whisky’s proof before bottling. 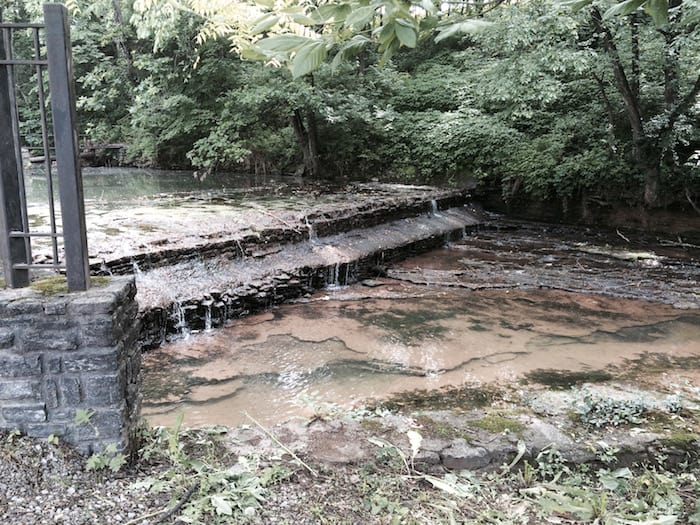 The mineral attributes and purity of the water a distillery uses have a huge effect on the final outcome of the whisky. The water contributes to the weight and mouthfeel of a whisky, and can add tart or sweet flavor notes. The chemical properties of the water can have an impact on how well it marries with the final distillate when bringing down its proof. “Bad” water can quash all the effort that was put into distillation after maturation by preventing the congeners to settle down properly, causing an abrupt, hot finish.

For the same reason New Yorkers say “fuhgeddaboudit” when it comes to eating pizza and bagels outside of the city, Kentuckians are very particular about their local bourbon. Why? The water. The mineral composition has as much to do with the texture of pizza and bagel dough as it does the flavor of bourbon.

Oddly enough, they both are affected by limestone levels – New York water, sourced from the Catskills, has very little of it, and Kentucky water has a lot of it. As writer Jake Emen recently pointed out, limestone affects the flavor of a whiskey in three ways:

Taste a whiskey from Kentucky, and you’ll notice a distinct, tart backbone and higher viscosity that isn’t as evident in bourbon from upstate New York. Rye from Canada is sweeter than rye from Kentucky, not only because of the source of the grains and the different cask maturation, but also because of the northern water that goes into it.

If limestone isn’t part of the brand story, spring water from glacier and snowmelt is another whiskey selling point. Take a brand like Widow Jane out of Red Hook, Brooklyn. They based their whole marketing concept (their very name, in fact) on their water source, which they claimed was the Widow Jane mine in upstate, New York. Neat trick, considering their initial product offering was sourced whiskey from Indiana’s MGP. However, whiskeys that really do distill in this area with local water, like Hudson Valley’s Tuthilltown and Hillrock, will have a lighter finish than those from other parts of the country.

Mineral content isn’t the only way that water affects whiskey. Water easily absorbs inferential aromas and flavors, which it can impart to a spirit. A perfect example of this is ice. If left more than a few hours in a freezer that shares refrigeration with food, it will absorb those odors, hence why drink aficionados get so picky, no pun intended, about where ice for drinking is stored.

Take a peated Scotch: It will achieve its distinct character from the peat, but also the local water. Being in such close proximity to the ocean, even fresh inland water will take on medicinal, briny traits, as evident in Scotches like Laphroaig and Lagavulin. Islay water also has more natural acidity than in other parts of Scotland.

The nature of the peat used to dry the barley in some styles of Scotch is also affected by the water in its moss composition and the bog in which it grows. Peat harvested from Islay will release a more maritime-laden smoke than peat from the Highlands or an island like Orkney, where Highland Park is distilled.

There is even a clear distinction in unpeated Scotches. Speyside malts, which are naturally lower in minerals, are generally more fruity than lowland and Campbeltown malts, which still have a rich weight to them, but are also more earthy.

So it is true that whisky is aquavitae, the “water of life.” However, much of what gives whiskey life is water. How it nourishes the grains in the mash, the distillation process, whether it’s added to lower cask proof, even the ice or water that might be added to the whisky when sipping it – these are all important factors to ponder when tasting that special elixir of choice.