High Wire Distilling, based in historic Charleston, South Carolina, is not your typical craft whiskey distillery. Founded by husband and wife team, Scott Blackwell and Ann Marshall, High Wire is known for making your typical bourbon and rye style expressions, but for a good number of whiskey related bottlings it is making use of rarer heritage types that falls to Blackwell’s specialized background as a former artisanal baker to help manage.

The spread of these heritage grains includes some rarer rye and corn varieties, with perhaps the most exotic being Jimmy Red, a near extinct corn only being nurtured along by a handful of dedicated individuals. Blackwell and his team, once introduced to it, began working to help grow larger amounts of it, and today there’s enough available for it to be a wider ranging release.

To learn more about High Wire and the innovative distilling they are do, we recently chatted with Blackwell. Note this interview has been edited for clarity and brevity. 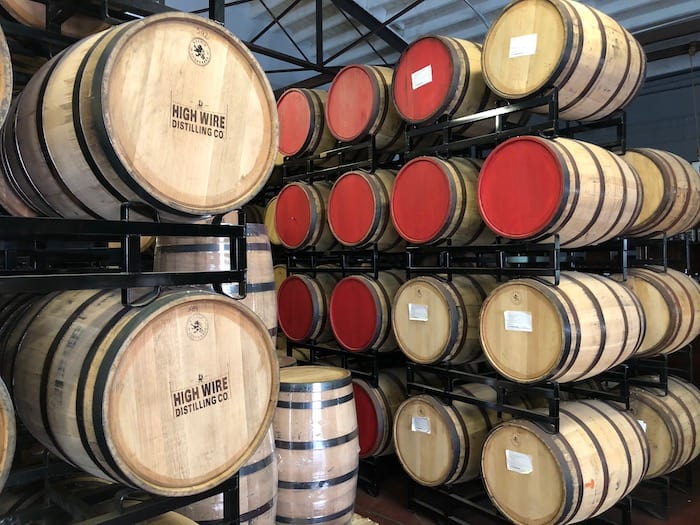 The Whiskey Wash (TWW): Go back to the beginning of the distillery. Tell me about when you guys found it. What was the idea behind it?

Scott Blackwell: I am a food person, historically. I’ve been in food business since I was 15. And then I started a small business while I was in college making desserts for restaurants, basically for tuition money. That wasn’t really intentionally an entrepreneurial move. It was just, I need money, kind of like cutting grass or things of that nature, but ended up getting bit by the bug of, “Hey, I’m capable of making something and selling it and people will buy it and want more, hopefully.”

Prior to starting High Wire we had a company called Immaculate Baking. We made organic and natural doughs, and sold to like Whole Foods and places like that. We eventually approached and were bought by General Mills. During that last six months of having that company we knew we were going to do something. The writing was on the wall. We have venture capital money, and all that, so we knew were going to exit at some point. We started looking around at different businesses, and I was brewing beer at the house for about three years, and had been very interested in craft beer. I was just gung ho that we were going to get a beer company going.

After hearing me talk about it and tasting a lot of beers, my wife said, “I hate to break your heart, but my heart’s not in beer. I don’t want to do beer.” I ended up hearing what she had to say. She said, “How are you about spirits?” I was like, “We don’t know the first thing about spirits.” But, she’s a very smart, astute observer. She had been reading and looking at data and articles, and had noticed that craft distilling in 2012 was sort of on the radar.

We met with a craft beer distributor here that’s fairly good size and he looked at me, he said, “Hey, I would carry your beer. But have you even thought about spirits?” And he doesn’t carry spirits. I thought, that’s kind of odd he said that. She said, “I’ve told him the same thing.” Then he goes, “I think you ought to listen to your wife.” I said, “Okay, I’m game. We can figure this out.”

Then I’d heard about this guy, Dave Pickerell. I reached out to him and I said, “I’d love to hire you if you’re available to help us. We’re going to buy a still. Our friends up in Asheville had a copper still and it just so turns out that they were going to upgrade and they were going to sell their old still.” Dave actually was talking to them as well. My first introduction to him was at their place, and we made some rum up there together. Then, I said, “When we get our still set up come to Charleston.”

About five months later he came down, and we had two fermenters at that point. I’d gotten some open pollinated heirloom white corn and we made some more rum. Then we mashed some corn and I had a fermentation going. He basically just said, “I’m going to show you how to run the still. I’m going to talk to you about fermentation. I’m going to talk to about all the stuff you need, like all the hydrometers and show you how to proof. Just all the like kind of basic stuff.”

But about halfway in he said, “You’ve got this fermentation and grain thing. You really have that. Let’s focus on the distillation.” By day five we started talking about barrels. But the most funny thing of all was he looked at me right before he was leaving, barely a couple hours before he left, and he said, “Here’s the thing, with the grain and all that, whatever you do, people like bourbon, they like rye. They like single malt. But the base rule that I’m going to leave you with you here is you can’t out make Maker’s Mark. If you just get some corn and wheat and barley kind of taste, even if it’s made by some local specialty grains or whatever, it’s going to still taste a lot like Maker’s Mark.”

A friend of ours named Glenn Roberts runs a company called Anson Mills. I reached out to him because I ultimately did want to make a bourbon that was unique. He said, “Meet me down at Clemson at the research center, and we’ll talk about corn.” When I got there on the table, he had like 30, 40 varieties laid out. He was going through all the different types of corn, all the seeds. Then he kept skipping over this one sort of in the center of the table. I said, “What’s this one again?” He goes, “Oh, that’s the one you want. It’s called Jimmy Red. It’s an old huge corn. It’s really cool. It’s got some similarities to Bloody Butcher, but it’s got more blue in its genetics and history.” I said, “That’s awesome. I’d love to make some.” He said, “That’s great. Then you’re going to have to grow it, because there’s not enough for you to even do a distillation. You guys are grain hogs.”

We wanted 1,000 pounds of corn, so we wrote a check to Clemson for a grant and planted and did our first grow out there, and then distilled later that fall in 2014. We knew when we mashed, because it had this crazy thick oil cap and it smelled completely different than the white or yellow open pollinated corns we were working with, so we ended up knowing that we were on to something. Also, the flavor when it came off the still was very different. It had a weight to it, and the heaviness had some spice, which we weren’t getting from either of the other open pollinated corns.

Fast forward to this last fall and I think we harvested about 250,000 pounds of it. We work with four farms, and I’m trying to work with the farmers to produce a better product. 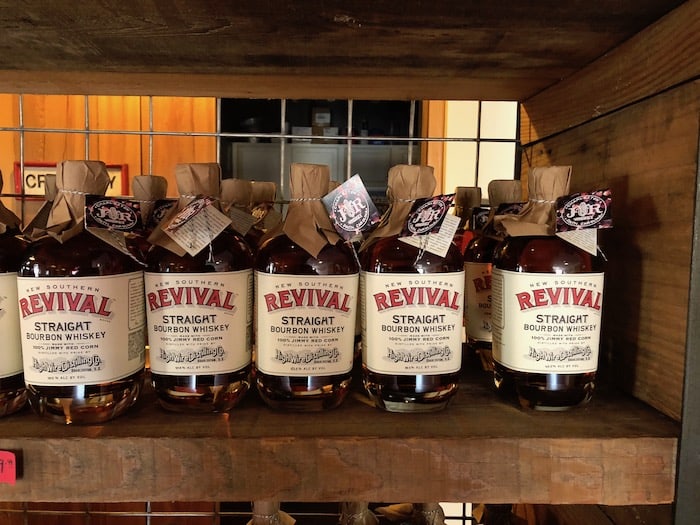 Blackwell: We’re working with a family up in the mountains of Tennessee and they’re Mennonites. I’d worked with sorghum back in my banking days for gluten free cookie dough, and I used sorghum and rice flour for that. John T. Edge, who runs the Southern Foodways Alliance, said, “Oh, you’re starting a distillery, huh?” And I said, “Yeah.” And he goes, “What about working with sorghum?” I’m like, “Yeah, I don’t know how that would work. It’s kind of weedy. I don’t know what that flavor would be.”

Edge said, “Well, why don’t I get in touch with the guys with Muddy Pond.” And I was like, “What, they make kind of a malty syrup.” It’s like a syrup they use when you brew. I don’t know if they’re home brewed or whatever. You can buy the cans of, basically, malt syrup. That’s basically what they produce. They plant a grain head type sorghum, and then they run that whole thing through the mill grain, grain head and all. When we get this stuff it’s kind of dark brown, but then there’s like these striations of tan solids where it’s just the grain kind of all mixed in with it. Its got like a starchy texture to it.

We had no earthly idea of what we were doing at this point. This was like literally we had opened the doors and three weeks later we made a batch. When it came off, it was like, “Wow, that smells like apples, kind of.” But I was like, “But it has this banana bread thing going on.” We put in some barrels, and a former chef here, Sean Brock, fell in love with it. Thought it was the coolest thing in the world. Then it just sort of took on a life of its own, but the reality is those Mennonites don’t make a whole lot of it. We tried some sorghum from other folks, but they don’t make it the same way. 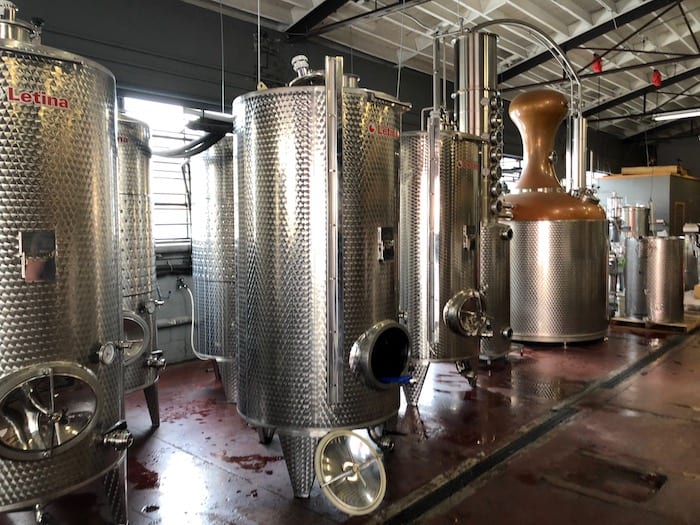 TWW: What does terroir mean to High Wire?

Blackwell: I think that the environmental impact of this area is distinguishable. I would say that that’s arguable from any plant, be it wine or trees or whatever. When you’re making barrels to when you’re making wine, there is some sense of place that we’re close to the coast, low altitude, things of that nature and some of that soil. If you took a plant from this soil like Jimmy Red, and put it in some new dirt, it’s not that it’s not going to adapt, but it’s going to change. It is going to change flavor. It’s going to change the characteristics of that corn.

For us, we feel like Jimmy Red is a tree land race. It’s adapted to these conditions. That is to me the best example of say, terroir. I do believe 100% in terroir, because in agriculture as a distiller I think you want to do as little to change that product or that ingredient. Start with really awesome agricultural ingredients, and then try not to screw it up along the way when you’re mashing, fermenting and distilling.