Remember a few years back when then Four Roses master distiller Jim Rutledge retired from the famous Kentucky distillery and then later announced he was working with partners on his own planned distilling operation? He attempted crowdfunding to help raise funds for his distillery’s development, only abruptly to pull the plug on this plan. Things went relatively quiet after that, but recently he became more visibly public again with word he was still working away at fulfilling his dream.

The planned J.W. Rutledge Distillery, according to those behind it, would occupy “140 picturesque acres of gently rolling grassland just outside Louisville” in Kentucky. Working off of a projected $20 to $25 million budget, an architectural concept of the distillery suggests “an elegant, two-building composition linked by physical representations of various elements of the distilling process. In form and footprint, the concept engages the landscape and gently steps downward toward Floyd’s Fork, allowing the process of bourbon-making to flow naturally via gravity, from grain delivery all the way to barreling.” 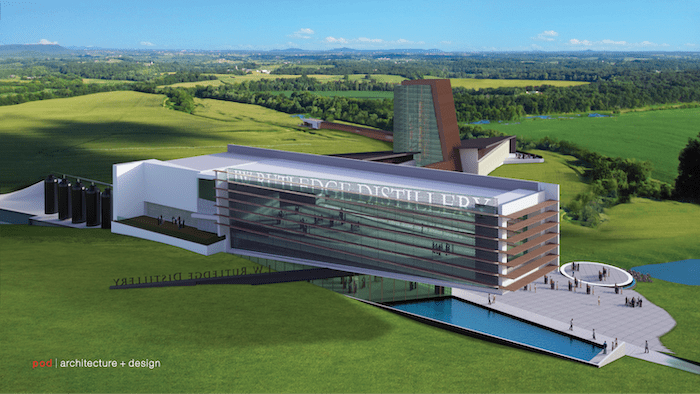 “We will produce Kentucky Straight Bourbon Whiskey and Straight Rye Whiskey the ‘old-fashioned way’ relative to the requisites, guidelines and standards for Straight Whiskey production that have been in place for close to two centuries,” said Rutledge in a prepared statement.

A key feature of this distillery reportedly will be its sustainability – specifically it would “be oriented to convert the naturally occurring stillage (the byproduct of bourbon making) into energy via a biomass digester and to capture heating and cooling through a geothermal pond loop.”

In addition to hoping to break ground on the distillery in 2019, Rutledge recently took on the revival of the Cream of Kentucky bourbon brand. Noted as being a sourced, over 11 year old expression, an initial release of it into limited markets is set to get under way. He is also working on something called High Plains Whiskey, of which at this point we only know that its mash bill will “entail a straight rye whiskey certain to become a fan-favorite.” Later down the line, as well, will be bourbon.