I love a good business story, especially one in which owners begin the endeavor without needing a fast buck. And when those stories involve great whiskey beer and food, it’s generally going to be a good day of interviewing (and tasting).

Yet sometimes—and these are rare—I visit such a business and am immediately blown away. When the vista is a multi-building tourism experience carved into the foothills of a forest, it almost seems too good to be true.

But this one is, and you can visit Hard Truth Distilling Co. anytime you like in the south-central Indiana town of Nashville.

In 2009, Ed Ryan, Jeff McCabe and Tim O’Bryan partnered to create a restaurant and microbrewery named Big Woods Brewing Co. The modest venture worked so well that they scaled it up to expand the restaurant and microbrewery. That expansion went well also, and the food and beer components grew and multiplied to include other restaurants. By 2012, the beer was so popular that a new company, Quaff On Brewing Co., was created to expand beer sales beyond its best customer: their multi unit restaurant company. By 2015, two additional partners were involved, and a distillery was under construction. 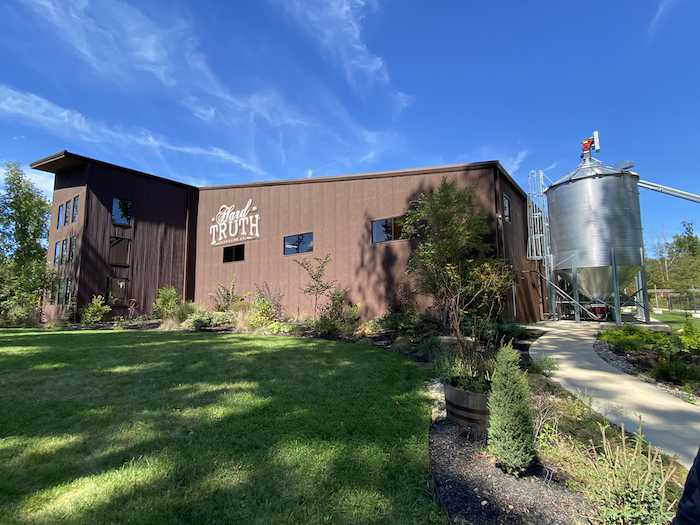 Fast forward to September of 2021, when I and my wife visited Hard Truth. At 1 p.m. on a Saturday, visitors were flowing into and out of the place by the hundreds: some astride motorcycles, some in pickups, some in minivans, others in high-end luxury cars. I’ve been to a lot of distillery visitor experiences, and I’ve never seen one so busy. Ever. Searching for a parking spot at a distillery was never an issue until that day. I’d have guessed a special event was underway, but it was just a regular busy Saturday at a place that hosted 400,000 visitors in the COVID year of 2020. (That happens when you have wide open spaces. Its partners expect visits will far exceed that this year.)

That’s right: more than Buffalo Trace, which tallied 293,996 visits that same year. For reference, Nashville, Ind., has a population of about 1,500, so it’s not as though the home crowd influences those numbers.

To be fair to Buffalo Trace, there’s no serious restaurant or extensive line of craft beers for guests to enjoy at the historic Frankfort, Ky., spot. But to be fair to Hard Truth, there’s only a five-man partnership behind the operation, not a multibillion-dollar company like Sazerac.

So, why then does Hard Truth Distilling Co. attract more visitors than one of the nation’s most legendary distilleries? Variety is one reason. If you can’t find multiple things to eat or drink there, you’re beyond picky. Just stay home. Seeing others have such a good time amid so many choices might upset you.

Quality is another. The campus’s timber frame buildings are gorgeous, and all of them are designed by Jim Dunbar, one of the five partners. Dude’s not even an architect, but he has the vision for what their facilities should look like and flow. (As the story goes, he and McCabe, whiskey flasks in hand, walked off the complex’s building barriers by wrapping yellow caution tape around the myriad trees in the forested space.)

The food at the distillery’s Big Woods restaurant isn’t haute cuisine, but it needn’t be. It only needs to be delicious (which it is) and go well with the beers and whiskeys and clear spirits cocktails they make (it does).

And those beers … I know this is a whiskey article, and I’ll get there, but man they’re great. I stay so focused on whiskey these days that I neglect the craft beer that I still love. But clearly someone’s buying it, because Quaff On Brewing is the second largest producer of craft beer in Indiana.

So, yes, let’s move to its spirits variety. Since opening in 2015, Hard Truth has sourced its brown spirits (MGP and Dickel) while laying down barrels of its own sweet mash bourbons and ryes. Those are approaching four years, which is when the first of those will be released in 30-barrel batches that are vatted and bottled at cask strength. I got to try several of those on my visit, and I can tell you with confidence that you’ll want them. Distiller and partner Bryan Smith is doing amazing work with its brown goods while also producing a broad range of rum, vodka and gin. Not surprisingly, the cocktail game at Hard Truth is strong.

I know what you’re thinking: People who do so many things rarely do a few things well. I get it, and I’m equally cynical about such operations. But that’s just not the case here. That broad array of eats and drinks—not to mention several tour packages that include ATV rides though the wooded hills—forms a business case worth studying. That so much talent is bound up in five men who aren’t formally trained in restaurants, brewing, distilling, building or tourism is a story that’s almost too good to be true, right?

Wrong. But you’ve got to visit it to experience it, understand it and take it all in. (If there’s any weakness whatsoever in the whole enterprise it’s its website. It’s not bad at all, but it’s merely serviceable compared to every other over-the-top aspect of the multifaceted business.)

If Nashville, Ind., sounds too out of the way for you, know that it’s just an hour south of Indianapolis and an hour north of Louisville, Ky. If you’re traveling to either, set aside a half day to go there and see what I’d argue is one of the best example of spirits tourism in the U.S.