Manipulating barrels to improve whiskey flavor isn’t new, but the owners of Wilderness Trail Distillery in Danville, Ky., are taking a truly novel tack. Co-founders Pat Heist and Shane Baker have a hunch that oxygen penetration through the barrel’s exterior benefits the liquid on the inside, so they’re working to boost that transfer by changing the outside of the barrel.

In aging, evaporative water and alcohol loss gradually creates head space in the barrel. And as liquids escape, oxygen moves in to form esters that create other chemicals like vanillin, which gives whiskey its vanilla aromas and flavors.

“Since we know that whiskey changes from a liquid to a vapor as it makes its way out of the barrel, we thought surely oxygen might be coming in from the outside, too,” Heist said.

What spurred the idea was a whiskey barrel’s redline. If you remove a stave from a barrel that once held whiskey, a glance at the stave’s sides reveals a rust-colored line located just behind the char line. The line marks the point at which the whiskey soaked furthest into the wood. But Heist and Baker saw other similar redlines beyond the standard one and wondered how they got there. They also wanted to know the chemical makeup of those marks. 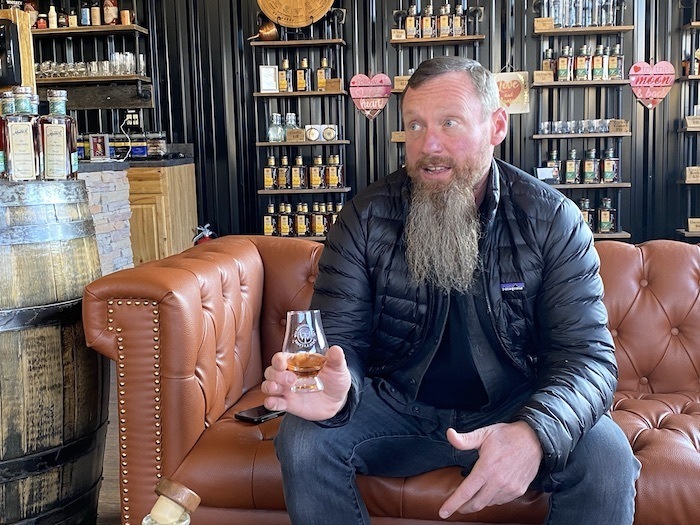 “What we’re talking about is different: that kind of line where it looks like stuff just settled into one spot,” said Heist. Working in their own lab and with researchers at the University of Kentucky, “we’re took core samples (of staves) to see what chemicals are in all in those spots … and they’re almost completely made up of vanillin.

“So, now we’re asking ourselves, ‘How do we increase oxygen diffusing into the barrel, and how will that affect flavor?’”

The two men approached Independent Stave Co., the world’s largest cooperage, to discuss altering the barrel’s exterior. Heist said one idea they posed was drilling shallow holes—“dimples, really, into the outsides of the staves. … They told us that would be a pain in the ass to do.” They settled on cutting narrow and shallow vertical grooves with a router down the center exterior of each stave.

“In this hypothesis, if we do that modification, will that increase vanillin in the barrel?” Heist asked. “We don’t know since those experiments just turned 2 years old. But that’s the fun of asking these questions.”

Cool as this experiment is, I visited Heist to discuss another. In February, the distillery released a wheated bourbon aged in barrels that were spiral cut inside after they were charred, and I wanted to taste it.

“When we dumped the whiskey, not only was there a lot of char in it, there were a lot of long strings of wood fiber that were also scraped out in the cutting,” Heist said. “It jammed up our screen on our barrel dump, which is undesirable from a production standpoint. But we wanted to ask whether it made a great tasting product.”

Since “great tasting” is a matter of opinion even on proven whiskeys, we shared our observations.

“It’s minty, almost like toothpaste minty,” Heist said. He was right, and it reminded me specifically of Pepsodent.

“But we’ve also gotten that particular minty note in barrels where we didn’t do this type of cutting,” Heist began. And “some of the first rye whiskey that came off our column still also had that flavor.”

But since this was a wheated bourbon, and since Wilderness Trail’s rye whiskey has a different wintergreen candy note, where was the toothpaste mint note coming from in this whiskey?

“We’re wondering if it’s because of the barrel it was in or because of that spiral cut,” Heist said. “But to do a true experiment, you can’t just do four barrels like we did. It would take at least 20 barrels.”

(**An aside worth mentioning here: Andrew Wiehebrink, director of whiskey research and innovation at Independent Stave Co., claims that the mint note most commonly associated with high-rye mashbills is born of the barrel rather than grain. That this Wilderness Trail whiskey contained no rye lends support to his statement.)

As we sipped and talked, we discussed the newly released bourbon’s strong baking spice character and its weighty mouthfeel—not viscous, but heavier than WTD’s more thoroughly filtered whiskeys. It was neither unpleasant nor beneficial, just different. Heist then steered the discussion back to the cut barrel exteriors.

“In those experiments, we’re making guesses based on observations, and the first observation was, ‘What the hell is that red line?’” he said. Once it was determined it was nearly all vanillin, the next question became, ‘Is that a byproduct of the oxygen diffusion in the barrel or from the outside?’ So, the next experiment, like we talked about, became making it easier for the oxygen to get into the barrel by reducing the thickness of the staves in certain areas.”

As owners of Ferm Solutions, a yeast manufacturing and consulting firm to distilling and food industries, Heist said he and Baker spend plenty of time immersed in rigorous tests and experiments for client problems. By comparison, playing around with altered barrels to learn their effects on whiskey is low-expectation fun.

“With experiments, some of those are, well, you never know, and then you take what you get!” he said. After cutting the staves’ exteriors, he said they “asked Independent Stave whether the whiskey would leak out of the barrel or evaporate quickly. “They said they didn’t know because they’d never done it. So far, though, that experiment is looking good.”