Editor’s Note: This column is republished with permission of its author.

This column is not about the latest iteration of the Bulleit family tragedy, which has been ignited again by an article yesterday in Neat Pour, in which Hollis Worth (née Bulleit) gives her first interview. Diageo, which owns Bulleit Bourbon and Rye, declined to comment for the article, as did Ms. Worth’s father, Tom Bulleit.

All cards on the table, I know Tom Bulleit professionally. I have never met Hollis Worth. I haven’t spoken to Tom in several years and we’ve never talked about his family.

My purpose in writing today is to look at another aspect of this, separate from the story itself, which is the risk any company takes when it ties a product or brand so closely to a living human being.

The most extreme example is the case of Jared Fogle, the principal spokesperson for the Subway sandwich chain from 2000 to 2015, when he was charged and convicted of sexual offenses against minors. Did Subway lose any business as a result? The company has struggled ever since Fogle’s misdeeds became public. Starting in 2016, Subway has closed more stores each year than it has opened, for the first time in its history.

They can’t blame all that on Fogle. Fast food is a brutal business and Subway’s success spawned a flood of imitators.

Every situation is different. Fogle was never presented as anything other than a spokesperson. Mila Kunis has been the spokesperson for Jim Beam since 2014, a significant run, but if she got into some embarrassing trouble it’s hard to imagine how the brand could be significantly damaged. Matthew McConaughey has been hawking Wild Turkey for about the same amount of time, and it’s the same deal there. Both brands have their master distillers and other personalities. The risk is spread around. 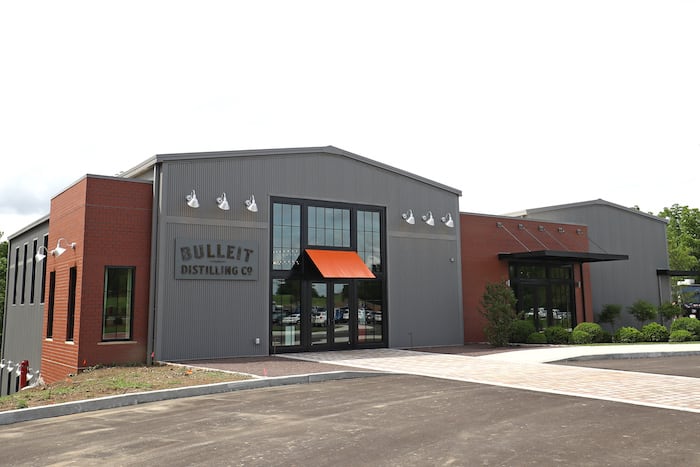 A slightly different case might be made for newly-launched celebrity brands, such as Ryan Reynolds with Aviation Gin, Bryan Cranston with Dos Hombres Mezcal, or Bob Dylan with Heaven’s Gate Whiskey. The only possible reason for a consumer to be interested in those brands is their interest in the celebrity owner. The celebrity is the brand.

In Diageo’s case, the cautionary tale with Bulleit is be careful what you create out of thin air. Tom Bulleit is a real, living person and he really did create a bourbon brand named after himself. Hollis Worth is his daughter, also real and alive. That is about where the reality ends.

The Bulleit brand launched in 1995, via Buffalo Trace. That was a contract distilling arrangement, Tom Bulleit owned the brand. A few years later he sold it to Seagram’s. They created the current bottle and brand story, including the legend of Tom Bulleit’s ancestor, Augustus. Seagram’s folded and the brand passed to Diageo in 1999-2000.

In a very real sense, Diageo is hoist on its own petard, as they have gone to great lengths over 20-25 years to make Bulleit look like a family company, even though it’s not. They took a name they liked because it was a homophone for ‘bullet’ and built an entirely fictional origin story around it involving currently living persons (and one dead one). They hired two of the living persons to front the brand throughout the industry, cast as founder and heir respectively. They overplayed the roles of those persons in the creation, making and marketing of the brand. As a result, Hollis Worth is very well known among bartenders, bar owners, and cocktail writers; and Tom Bulleit is very well known among distributors, retailers, and whiskey writers. They personify the brand.

You can do whatever you want with a dead or fictional person, but living people have real lives that can go awry and reflect negatively on the businesses with which they are associated, whether it’s Elon Musk or Jeff Bezos. It’s something else again when you cast living people in fictional roles. The actual connection between the people and the brand is minimal, but the fictional connection is real enough to hurt you when something goes wrong.

Inevitably, the Bulleit family conflict is a problem for Diageo. How big a problem it is, and what Diageo will try to do about it, remains to be seen.