Bourbon & Country Ham A Match Made In Kentucky Heaven

Editor’s Note: The Whiskey Wash welcomes our latest Kentucky based contributor Steve Coomes to our writing staff. His first piece for us talks to the finer points of pairing bourbon & country ham.

Were it not for glorious falls and springs, Kentuckians would gripe endlessly about the Commonwealth’s weather. Across the span of all four seasons, summer heat soars past 100 F and winter cold plunges below zero. But while such temperature swings wreak havoc on locals’ moods, they’re ideal for making Kentucky bourbon and curing “country” ham.

“Look at a globe, point to Kentucky and then trace that latitude around the world,” says Jay Denham, master curer at Woodlands Pork, maker of the Mountain Ham in Louisville, Ky. “You’ll start to see a narrow line going through Spain, Italy, France and China, all places known for cured hams. We call that the Ham Belt.”

A lifelong Kentuckian who worked 16 years as a chef prior to becoming a ham maker, Denham has long known that cured ham and bourbon pair brilliantly. 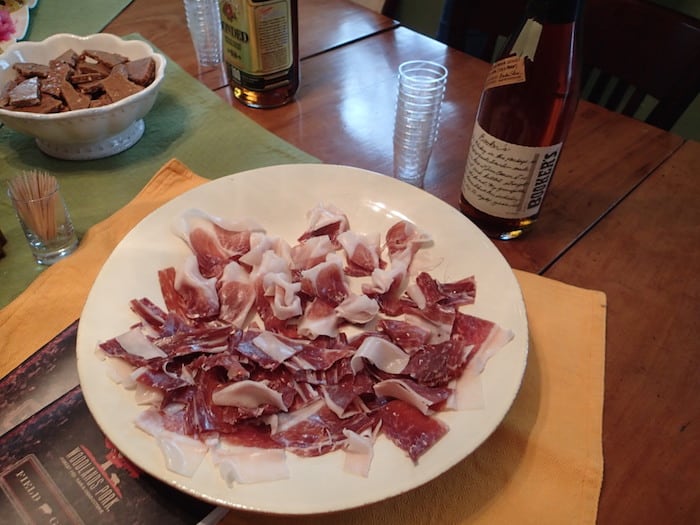 “The flavor that really connects them is the smoke in both,” he says.

Bourbon gets its smokiness via temperature fluctuations that move it into and out of the barrel’s char layer. Country ham gets its dose of smoke during aging.

“Just smelling both of them side by side, is awesome,” says Denham, grinning. “It blows me away sometimes that so few restaurants have figured out how to pair them.”

A brief cured pork primer: Country ham is loosely defined as the fresh hindquarter of a pig that’s been rubbed with a blend of 80 percent salt, 20 percent sugar, and a handful of black or crushed red pepper. The cure leeches water from the meat, which is then smoked and dry aged.

Before the advent of mechanical refrigeration, hogs were slaughtered in the early winter when it was cold enough to store salted meat outside without fear of it rotting. As temperatures warmed with the arrival of spring, the salt penetrated further into the meat and pushed out water, which harbors bacteria.

In the late spring, the ham was smoked near a fire of hickory or fruit wood to adorn it with a rich pecan color and a delicate aroma. Rising summer temperatures then triggered an enzymatic reaction that developed flavor and ensured the meat’s shelf-stability.

“You’ll hear on distillery tours that yeast is where the magic happens,” Denham says. “With hams, it’s that enzymatic reaction that makes them taste incredible.”

Bob Woods, ham maker and owner of The Hamery` in Mufreesboro, Tenn., calls country ham, “Hillbilly prosciutto. Most Southerners do cook their country ham, but if you just slice it and eat it just like prosciutto, it’s wonderful. I’ve really come to like it that way.”

As has Megan Breier, the Kentucky brand ambassador at Jim Beam in Clermont, Kentucky who we recently profiled. Her boss, master distiller Fred Noe, III, cures country hams at his home, “and you know he’s eating his with a glass of bourbon close by!”

Last February, Denham, Breier and I created a bourbon and cured ham pairing for about 80 people . Two weeks prior to the event, Breier brought a half dozen Beam whiskies to Denham’s home, where we and several chefs tasted eight ham and whiskey combinations. 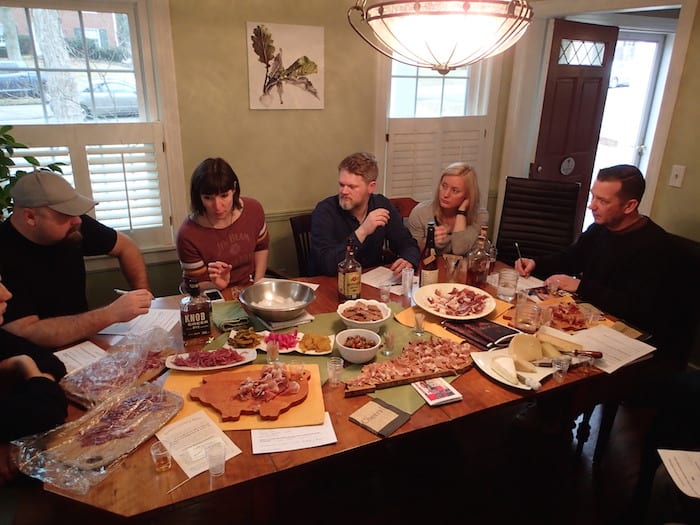 Though our tasting notes were a bit convoluted for this article, several commonalities became clear:

1. The fattier the ham, (such as Denham’s 2-year-old Mountain Ham) the better it paired with a high-proof bourbon, like Booker’s.

“The alcohol really penetrates the fat and digs into the palate,” Breier said.

2. The smokier the ham (such as Benton’s Smoky Mountain Country Ham), the better it paired with a rye whiskey or high-rye bourbon. Our test liquor was Knob Creek Rye (100 proof).

“Rye brings a lot of spice into the mix, and it counters a smoky ham really nicely,” Denham said.

3. For fans of lower proof bourbon, the ideal pairing was a delicate ham, such as Woods’ Tennshoetoe.

“A big bourbon like (Jim Beam) Bonded (100 proof) can overpower a ham like his,” Denham said. “The Jim Beam Quarter Cask (86 proof) was a nice fit with that ham. Basil Hayden’s (80 proof) would be excellent, and so would a wheated bourbon like Weller 12 (90 proof).”

And the ham that stood up to Beam Bonded? The Surryano, a fatty and complex 18-month-old ham from Edwards & Sons.

“There’s just so much flavor going on there, and it’s coming from both sides of the pairing,” said Patrick Roney, chef de cuisine at The Oakroom in Louisville. “That pairing is just huge on the palate.”

If you’d like to try your own country ham and bourbon pairing, here are a few tips.