Angel’s Envy, each year around this time, gets ready to send to market its premium Cask Strength Kentucky Straight Bourbon Whiskey Finished In Port Barrels. Normally the most exclusive offering the distillery offers, it has been overshadowed somewhat by the Angel’s Envy Kentucky Straight Bourbon Whiskey Finished In Japanese Mizunara Oak Casks bottling that was announced a little earlier this year. Nonetheless, the Cask Strength holds its own as a top tier whiskey in Angel’s Envy’s line up.

The Angel’s Envy 2020 Cask Strength Kentucky Straight Bourbon Whiskey Finished In Port Barrels, according to those behind it, is bottled this year at 120.4 proof (60.2% ABV), representing the ninth iteration of a program that started in 2012 when “Wes Henderson, along with his father, the late Master Distiller Lincoln Henderson, and his eldest son Kyle Henderson, first selected a handful of exceptional barrels to put through the extended finishing process in Portuguese port wine casks. The tradition has been carried forward by Wes and his sons each year since.” 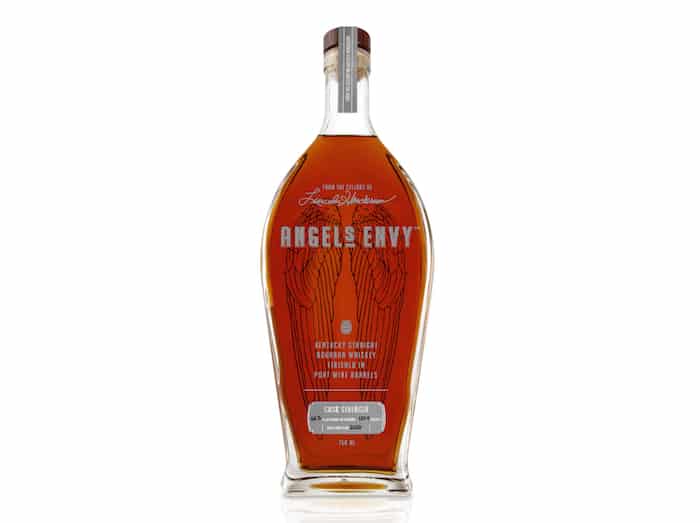 As a unique bonus this year this bourbon, for the first time, will be offered in all 50 states, totaling some 17,400 bottles for release.

“My boys and I look forward to working together to release our Cask Strength whiskey to bookend each year – it’s our family tradition that lets us both reflect on and celebrate our growth,”said Wes Henderson, Co-Founder and Chief Innovation Officer of Angel’s Envy, in a prepared statement. “Many of our fans have made it their own tradition to hunt down and collect our annual Cask Strength release, or give it as a special gift over the holidays, so we’re especially excited that folks in all 50 states will get the opportunity to track down one of 2020’s special bottles.”

Plans currently call for Cask Strength, pricing around $200 per 750 ml bottle, to begin rolling out at the beginning of November. Official tasting notes speak of “apricot and plums, baking spices, brown sugar, vanilla, oak and leather. Bing cherry is heavy on the nose and carries through to the taste. On the palate, the juicy Bing cherries shine through, along with notes of salted chocolate, orange peel and some cedar.

“The bourbon has a tannic finish that’s complemented by citrus, is not bitter or too drying and lingers at the back of the mouth.’