This whiskey drinker had never been to Kentucky until I competed in the Bardstown Bourbon Company World’s Top Whiskey Taster (WTWT) finals in November. Florida (Eric “Pappy” Hale) and Texas (Kolby Howard) rode into Bardstown from the airport together. We referred to each other by our regionals, which during a pandemic made the whole thing feel like a spin-off of Zombieland.

I could not wait to meet the other contestants, especially Kentucky herself, Sara Havens. Out of all ten regional winners, we were the only females in the finals. We flocked together to quell the testosterone around us. If it were not for her, I would not have had twice the fun I did.

During the social, though, Indiana (Jeff Clark) sought me out. Tis moment sticks out because it overwhelmed me with flattery. A friend of his told him to watch my regional video. For my presentation portion, I showed off a non-peated scotch flight. A bold move. After watching my presentation, Indiana went to a liquor store going out of business and bought all the scotches and more.

The highlight of the social was a vintage flight curated for us by VP of Hospitality and Product Development, Dan Callaway. We sat in the Vintage Library surrounded by an amazing collection of antique whiskey. The flight consisted of Old Grand Dad, Very Old Barton, and Old Fitzgerald from decades before I was born. It was incredible, and I will not forget it.

Portland, Oregon – where I’m from and where The Whiskey Wash, of which I write for as a reviewer, is headquartered –  is three hours behind Bardstown time wise. That sucked. I ended up going to bed after the social and finishing a review around 3:45am (EST). Bad move considering Colorado (Mike Outcalt) forgot he ordered an ice coffee compared to my hot mocha the morning of the competition. I still feel bad for sternly repeating, “I’m fine,” to our most gracious chaperone, Nicholas Lewis. 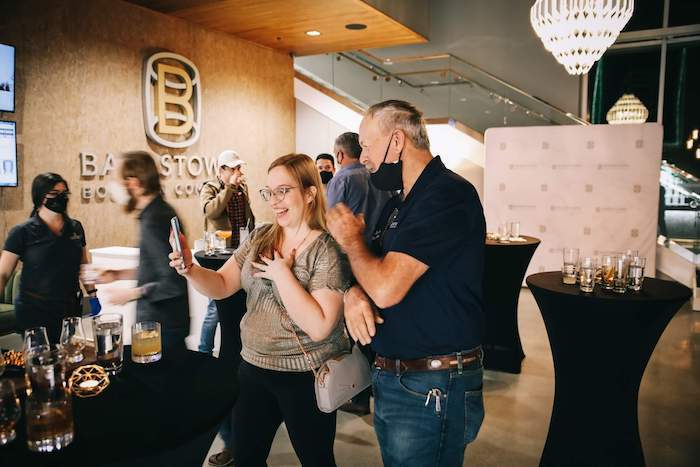 I was thrilled there was a tour first. Master Distiller, Steve Nally and Dan Callaway took us to the honey spot of the rickhouse. We thieved from three barrels while other tourists were watching us from Pete’s Place.

My breakfast that morning consisted of a stale bagel and cream cheese, and I knew it would not be enough. To keep my senses, I made sure to sip and spit. If there was whiskey in our glass, Steve gave us permission to bless the barrels. Simply put, I threw my whiskey over the racked barrels like I was performing an exorcism. Under normal circumstances, I would never waste my whiskey, but I was competing for $20,000 after all.

After thieving some whiskey from the barrels, Steve walked us through the distillery, where I felt most at home in the fermentation rooms. I loved the smell and dipping a finger in the vat to see how it was coming along. However, after all the walking, all I wanted was to sit and enjoy lunch.

I chose to sit at a table with the huge living moss wall with Bardstown Bourbon Company in large letters. My lunch table was the best table. Steve Nally joined us, and then Peggy Noe Stevens showed up and I fangirled hard. I savagely ate the best fried chicken with my hands in front of her and did not bat an eye.

Having lunch with my idol was extraordinary. She is the sweetest and sassiest lady. As one of the judges, she did not know what her round really consisted of. All we knew was that it was a culinary pairing piece, which perfectly made sense since she wrote Which Fork Do I Use with My Bourbon? I even recommended a book to her that I use for bartending and culinary pairings myself, The Flavor Bible.

We all had finished eating, and the minutes ticked down to the start of the competition. Colin Blake from Moonshine University did a sensory evaluation with us. We were presented with vanillin, fruity blend, and geosmin. Geosmin is a terpene fault in bourbon that gives off an umami and damp soil aromas.

I completely and utterly botched the first round. The fruity blend consisted of red apple, green apple, and banana. I thought it was the fault because it made me gag. As a scotch lover, I thought the geosmin was pleasant; Sara did too. The scoreboards revealed I was in last place, and next up was the blending portion.

Blending is not my strong suit. As we walked the winding path to the rickhouse and climbed to the sixth floor, I was filled with dread. I found my station. We had 20 minutes to blend and write our notes. I went with a 60-20-20 using the three whiskies, which made Steve a little wary when he saw the makeup of my blend.

The culinary portion with Peggy was about to commence. I sat outside collecting my thoughts. Already feeling like a fraud, my confidence was obliterated. Since I won the California regionals, I got cioppino to pair with. It is a dish that originated in San Francisco by Italian immigrants, and it just happens to be my favourite meal. I paired it with the Bardstown Copper & Kings Sherry Finish; not to suck up, but because the other whiskies were to spicey in proof or rye content, or they were too delicate.

The scoreboards updated with round two. I was astonished that I had the highest scoring blend of the group. I dubbed myself the “Comeback Kid.” Steve told me he was going to keep it on file to tweak and use in the future as he was impressed with its finish. Right then, I won regardless.

Lastly, the final round was a blind tasting. We had one whiskey, and we had to give the proof, age, mash bill, distillery, and brand. I got in my head and second guessed myself. Sara and I thought it was EH Taylor Small Batch. On the other hand, Mike and Pappy both thought it was Maker’s 46 cask strength.

I should have gone with my gut and put Bardstown Discovery Series No. 3, which is our host, Samantha Montgomery’s blend. It is also the same bourbon we were all given in our swag bags upon arrival. The same autographed bottle we all refused to open. Steve told us that everyone in Kentucky drinks their whiskey instead of collecting it. C’est la vie!

The winner was Matt Porter. He correctly guessed the blind whiskey. Honestly, he deserved it. Meanwhile, I came in fourth place. Not bad out of 400 applicants, and I at least I can say I am the fourth best whiskey taster in the country. I am so grateful for the validation this opportunity gave me, and I am already working on my submission video for next year to seek redemption.