The 2020 crop of Van Winkle American whiskeys have been announced by Buffalo Trace. Consisting of the five bourbons of various ages and the one rye these expressions, as always, immediately become some of the hottest bottlings to hunt for in liquor stores for those into this. Alongside of these releases, the distillery also announced the usual caveats of limited availability and price gouging.

“Good news is there is more 13-year rye than in years’ past.” 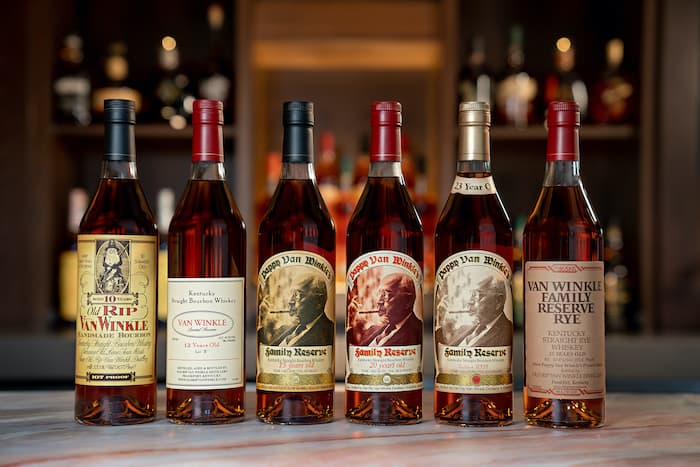 Official pricing information for each is as follows:

With regards to the caveats mentioned above, we’ve already spoken to limited availability related to barrel yield. Pricing is the bigger concern, as always, and 2020 is certainly no exception. “Unfortunately even though we suggest what we believe to be a very low and fair MSRP, we cannot control the price retailers charge, and some retailers mark it up even though we and the distributors that those retailers buy from ask them not to,” said Julian Van Winkle, president, Old Rip Van Winkle Distillery, in a prepared statement. “We are committed to releasing quality whiskey at a reasonable cost and we hope retailers will honor what we suggest as a fair retail price.”

Alongside the pricing warning comes a stern note from the brand to take heed of not selling or buying these whiskeys from online forums such as private Facebook groups or Craigslist. “Trading and selling bourbon online is an unlicensed and illegal sale,” added Kris Comstock, senior marketing director at Buffalo Trace Distillery. “If you are not a licensed retailer selling Van Winkle products, we are prepared to take action to curtail the activity.

“Additionally, if you are a customer trying to buy a bottle at a licensed retailer who has marked it up above MSRP, we encourage you to file a complaint with the Better Business Bureau or contact your state Attorneys General office.”

Plans currently call for all Van Winkle whiskeys to be made available in very limited numbers in November. As an aside, some may not understand the history of the Van Winkle brand and how its whiskeys have gained such a cult status. In regards to this, Buffalo Trace noted that “The Old Rip Van Winkle Distillery has a four-generation history. The Van Winkle family’s involvement in the bourbon industry began in the late 1800s with Julian P. “Pappy” Van Winkle, Sr. He was a traveling salesman for the W.L. Weller and Sons wholesale house in Louisville. Pappy and a friend, Alex Farnsley, eventually bought the wholesale house and also partnered with Mr. A. Ph. Stitzel on the purchase of Mr. Stitzel’s distillery.  The three of them merged the two companies and became the Stitzel-Weller Distillery.

“In May of 1935 at the age of 61, Pappy opened the newly completed Stitzel-Weller Distillery in South Louisville. Its prominent brands were W.L. Weller, Old Fitzgerald, Rebel Yell, and Cabin Still.  Pappy had a heavy influence on the operations there until his death at the age of 91. His son, Julian, Jr. took over operations until he was forced by stockholders to sell the distillery in 1972. The rights to all of their brands were sold to Norton Simon, Inc. Later, United Distillers, who eventually ended up with the Stitzel-Weller Distillery, sold off all of the original labels around 1999.

“After selling the distillery, Julian Jr. resurrected a pre-Prohibition label, the only one to which the Van Winkles kept the rights, called Old Rip Van Winkle. He used whiskey stocks from the old distillery to supply his brand. Julian Jr.’s son, Julian, III took over in 1981 when Julian, Jr. passed away. Julian III has continued with the Van Winkle tradition of producing high-quality wheated bourbon. His son, Preston, joined the company in 2001 and the Van Winkles look to continue that tradition for generations to come.