Wonderland Distilling out of Michigan, with the stated mission of creating handcrafted spirits from local ingredients, has announced the release of its first-ever, distilled on-premise product—a limited-edition, single malt whiskey aged in apple brandy barrels.

Wonderland’s new Single Malt Whiskey Aged in Apple Brandy Barrels, according to those behind it, is the first Wonderland whiskey distilled and aged on premise. It incorporates 100% Maris Otter Malt, uses what’s described as traditional distilling methods, and takes the process one step further by aging the distilled product in apple brandy barrels.

“Among the opportunities in the American single malt category is its variability from one distiller to the next. We see this as our chance to experiment and craft a distinctly Michigan single malt product that is as unique as the state we live in,” said Mark Gongalski, CEO of Wonderland Distilling Company, in a prepared statement. “For the more adventurous spirits drinkers, we’re experimenting with aging in different types of barrels and new processes with some of our releases this year and have more exciting releases coming soon.” 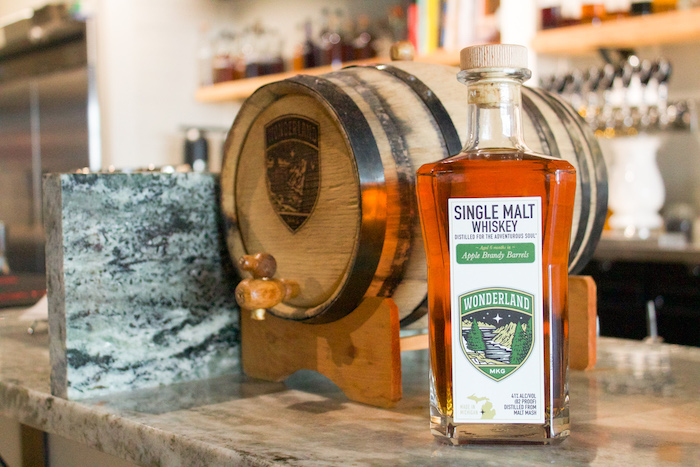 The distillery noted this is a very limited release, amounting to only 60 bottles available at its on-site cocktail bar right now. It is bottled at 41% ABV (82 proof) and retails for $64.99. Official tasting notes make mention of “strong notes of apple pie with biscuity overtones. The spirit is smooth and velvety with a palate of rich fruits and baking spices and hints of rich caramel on the finish.”

Prior to this offering, Wonderland’s first whiskey releases were created primarily from individually aged, Michigan-distilled rye and wheat whiskeys from partnering distilleries across the state, hand-blended with purpose to create a specific taste profile. Wonderland also began distilling its own whiskey in 2020.