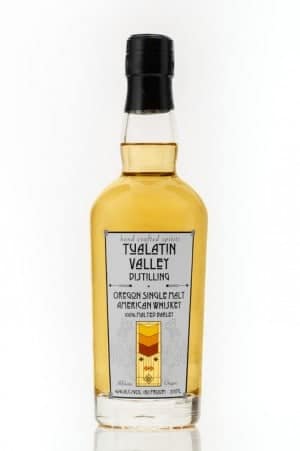 Located in Hillsboro, a suburb of Portland, Tualatin Valley Distillery is a small craft distillery focused on single malt whiskey. We’ve written recently about their plans to release a single malt whiskey made entirely from Oregon-grown and Oregon-malted barley, made by Mecca Grade Estate Malt, one of Oregon’s first malteries.

That whiskey, called Tualatin Valley Oregon Single Malt American Whiskey (Batch #5), has finally hit the market. The spirit was distilled from 100% Oregon-grown and malted barley, and then aged for six months in a mix of small charred American oak and toasted Hungarian oak barrels. While the small barrel, short duration aging approach isn’t always successful, in this case, I wondered if that tactic would help showcase the qualities of the grain itself, unobscured by maturation.

Mecca Grade Estate Malt, Tualatin Valley’s source for Oregon barley malt, is one of a handful of new craft malteries popping up around the United States. Mecca Grade is unique in that they grow all of their own barley on an eighth-generation family farm in central Oregon. In partnership with Oregon State University’s barley breeding program, Mecca Grade grows a unique variety of barley called ‘Full Pint,’ which was specifically designed for the craft brewing industry. While their malts have been adopted with enthusiasm by West Coast craft brewers, this might be the first whiskey made entirely with Mecca Grade’s Full Pint malt.

Nose: A meaty, almost savory nose with earthy notes of mushroom, earth, and salt. Underneath, there are sweeter suggestions of peanut brittle, candied nuts, and a hint of red fruit.

Finish: On the short side, as to be expected from such a young whiskey, but pleasantly sweet and toasty.

Jason O’Donnell described Mecca Grade’s malt as “peanutty,” and I definitely agree. This is a surprisingly rich spirit for its young age. While it won’t fool you into thinking that it’s a 10-year-old Scotch, for fans of the American Single Malt category, this is an interesting release and a fascinating window into the new world of craft malting. At $29 for a 375ml bottle, it’s fairly priced, too.