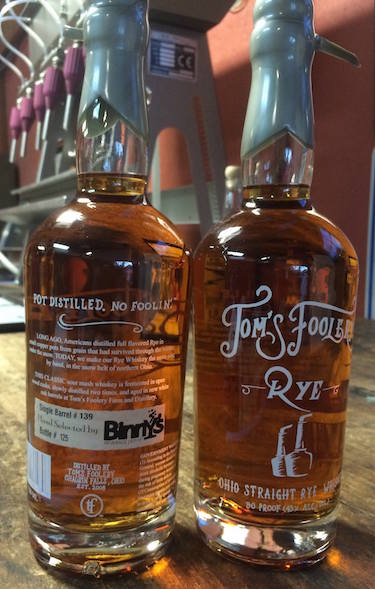 Located in Chagrin Falls, Ohio, Tom’s Foolery is a craft distillery that produces three iconic American spirits: applejack, bourbon, and rye whiskey. Founded in 2008, this tiny distillery grows some of its own grain and fruit on a family farm, and has dedicated the past four years to amassing a major collection of filled full-size whiskey barrels. We visited Tom’s Foolery earlier this year; you can check out our previous coverage here.

In 2011, Tom’s Foolery acquired a pair of alembic pot stills that were originally used by Michter’s in Schaefferstown, Pennsylvania. Sized to produce just one barrel per run, these stills were operated mainly as a tourist attraction by Michter’s in the late 1970s. Their small size meant they could run daily during tourism hours, and their relatively simple operation was easy for visitors to understand.

The barrel-a-day model lends itself easily to mash bill experimentation, and founder Tom Herbruck took full advantage of that opportunity. The “Whiskey Database” section of Tom’s Foolery’s website is a treasure trove of transparency for those with an interest in distilling. Online, you can view a complete and immensely detailed log of the contents of each and every barrel in their rack house (all 420 of them), from the source of the grains used in the mash to the exact date the barrel was filled.

Recently, those historic stills were sold to the new Michter’s, where they will be displayed in its new visitor’s center under construction in Louisville. While the distillery is no longer using the old Michter’s stills, Tom’s Foolery Straight Rye was likely made on them. The release is a blend of 10 rye barrels, all aged somewhere between two-and-a-half years and a little over three years. It’s bottled at 90 proof, and contains a mix of raw rye grain, rye malt, and bit of barley malt. If you’re interested in the details (and there are lots!) check out Tom’s Foolery’s product page on the release here.

Nose: This whiskey has a mouthwatering herbal, grainy nose, with notes of menthol, caraway, cereal, and marzipan giving the impression of walking in the door of a German bakery. Complex, unusual, and extremely inviting.

Palate: Initially sweet and honeyed with a rich, thick mouth feel, this spirit delivers a very spicy mid-palate with notes of burnt toast, clove, dates, and cinnamon red hots. The finish is astringent and tannic, with a bit of artichoke-like earthiness.

There’s a lot going on in this whiskey, and some of it is pretty outside the box. The palate doesn’t quite live up to that delightful nose, but on the whole this spirit manages to showcase both the fruity and spicy qualities of the rye grain for an enjoyable pour with some unusual elements.