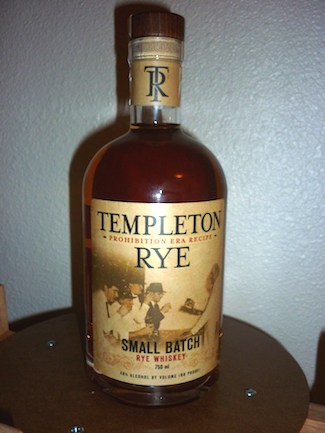 Tracing its roots back to the Prohibition era, the Templeton Rye whiskey story says it was first distilled in 1920 by the residents of Templeton, Iowa, who rebelled against the Eighteenth Amendment’s total ban on producing and consuming alcohol by making their own whiskey, dubbed “the good stuff”. Templeton Rye eventually was sold and enjoyed by people across the country, and one of its fans was Chicago gangster Al Capone, who described the drink as his favorite whiskey. The repeal of Prohibition in 1933 and Capone’s imprisonment in Alcatraz in 1934 sparked a decline in demand for Templeton Rye, and it fell into obscurity for decades.

In 2001, however, Iowans Scott Bush and Meryl Kerkhoff formed a partnership to bring back Templeton Rye by reportedly following the original recipe. After extensive research and modifications to make sure the recipe followed federal guidelines for rye whiskey, the first barrels of Templeton Rye were bottled and sold in 2006, and what was considered by it makers to be “the good stuff” once again was available for a new generation of whiskey drinkers..

Templeton Rye, though a fairly popular whiskey at retail, has been the subject of class action lawsuits around labeling practices on its bottles. The actual site of distillation has been in at MGP Ingredients in Lawrenceburg, Indiana since 2006, which has caused a bee in the bonnets of many whiskey drinkers who believed this rye should have been originally labeled as distilled in Indiana. A recent settlement around these concerns has now led to the fact that anyone who has purchased Templeton Rye since 2006 can now, with or without proof of purchase, receive partial refunds. Every bottle of Templeton Rye will now also have to feature the words “Distilled in Indiana” and must remove the words “Prohibition Era Recipe” and “Small Batch”.

Thus, in spite of any merits the whiskey possesses, the lies it has built itself on inevitably hurt its credibility and reputation among whiskey drinkers. It remains to be seen whether those who came up with this brand can put this issue behind it and regain the trust of consumers.

As for the actual rye whiskey in the bottle itself, Templeton Rye is aged for four years, and when poured into a glass, the color is a pale and dull amber hues. The spirit gives off a faint yet tantalizing scent full of rye and wood. It’s delightful to breathe in the full-bodied aroma, which gives off the unmistakable flavor of rye grains, orange, and cinnamon.

Just inhaling gives you a taste of sorts, which goes to show that Templeton Rye boasts a robust taste and is a cut above the typical whiskey.

Templeton Rye features a unique interplay of smooth and sweet flavors contrasting with hotter and more abrasive sensations on the palate. The taste of rye dominates, and is a very savory and distinct grain tang to it. However, other tastes blend in with the rye; a slightly spicy feeling flows along the tongue, and one can notice fruity and woody notes in abundance as well.

Consistent with most whiskey, Templeton Rye has an alcohol content of 80 proof, matching its easy and leisurely taste. With just one sip, it’s impossible to tell that this is anything other than rye whiskey. The impression on the palate is bold but still subtle. The aging and the absorption of wood are very palpable in each sip, and add a delightful oak taste.

Templeton Rye has an impressive appearance, and boasts an enjoyable taste. However, for its original shady labeling that masks its distilling location and recipe, Templeton loses a number of points. It may have begun during Prohibition, but the current whiskey will have to do a lot of work to repair relations with its consumers.

I give the Templeton Rye whiskey a rating of 70.