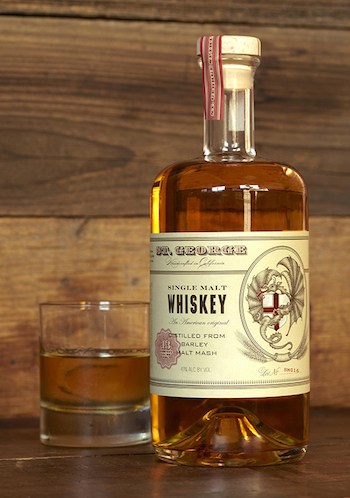 St. George Distilling in Alameda, California, has been breaking barriers and setting trends in the American craft distilling scene since its founding in 1982. St. George also began producing outstanding single malt whiskies in the early 1990’s, some of the first in the nation, and even today, St. George continues to be an industry leader.

Although widely known for their unique and coveted whiskies, St. George produces a variety of strange, and usually funky, products. From their famously pungent rhum agricole, to their seriously baller Baller Whiskey, St. George isn’t afraid to make bold flavor statements. In fact, when the American ban on absinthe was lifted in 2007, St. George was the first stateside distillery to release their own iteration, named Absinthe Verte.

With many of the previous lot numbered single malts difficult—or even impossible—to find, St. George’s release of the lot #16 single malt is more than exciting. Information from the distillery indicates the distiller “ventured deep into the far corners of our whiskey library and drew from a selection of different barrels ranging 4–10 years in age.”

As this expression has been a yearly release for sometime now, there is a general formula it follows in creation, according to St. George, in which they use “multiple roast levels of malted barley to build layers of subtle flavor and an intoxicating bouquet. Additional complexity comes from lightly smoking a portion of the barley over alder and beech, and from aging the single malt in a variety of cooperage types (used bourbon casks, French oak, port and sherry casks).”

The 2014 St. George single malt lot release was named Craft Whiskey of the Year by Whisky Advocate, and the 2015 certainly held its own as well. How does Lot 16 play out? Let’s find out.

Appearance: The dram is a welcoming medium golden caramel.

Lot #16 proves very interesting; Refined and clearly thoughtful, St. George has surprised me yet again. From my past experiences imbibing in St. George products, I was expecting a bolder, punchier whiskey. I was pleasantly surprising to find instead an American whiskey that showed insight and restraint. A very unique & elegant dram. A very welcome and interesting addition to the St. George family.

3
Shares
1.5k
Views
Share on FacebookShare on TwitterGet Our Newsletter
Get The Macallan® Rare Cask at ReserveBar. Shop now!