In some parts of the country, maple syrup is more than that stuff you put on pancakes; it’s a way of life. Tell a Vermonter that Mrs. Butterworth’s is just as good as the real stuff and, well, let’s just say you probably won’t be invited back to that particular sugar shack.

Maple syrup can only be made in areas with two things: sugar maple trees, and a climate that reliably delivers freezing nights and above-freezing days during the early spring. That’s a relatively small band of the country that stretches from the upper Midwest, across Pennsylvania, into the mid-Atlantic, and up to New England.

Coincidentally, those are almost exactly the same areas that traditionally made rye whiskey. There’s a saying in the culinary world: what grows together, goes together. And make no mistake: maple syrup and whiskey make excellent companions. As a substitute for simple syrup in whiskey cocktails, maple syrup adds a silky texture and unmistakable richness. Some maple syrup producers are even resting their syrup in whiskey barrels to give it an oaky, slightly boozy boost.

Which begs the question: if maple syrup benefits from time in a whiskey barrel, what would happen if you put whiskey in a maple syrup barrel? That question seems to have occurred to several distilleries, most of which are located in that special maple belt alluded to earlier.

So, in a spirit of inquiry, we assembled a collection of three different maple-finished whiskeys: two from New York, and one from Virginia. Would they be saccharine sugar bombs? Or would these concoctions elevate humble wood sugars to a new, synergistic pinnacle of flavor? Let’s find out. Note that the these whiskeys got rankings instead of scores, with one being the best. 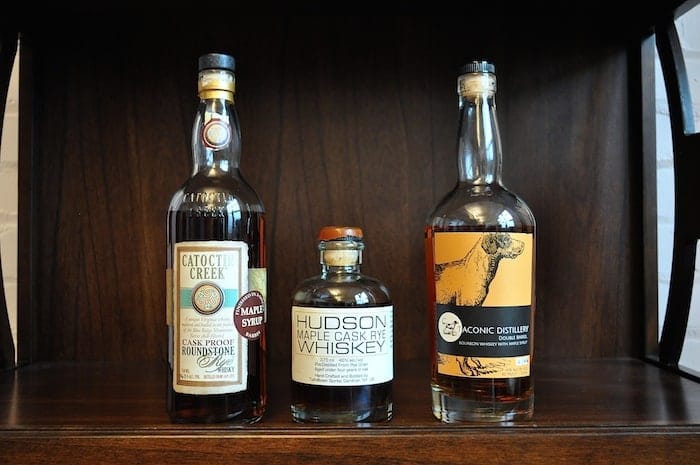 All three of these whiskeys spent time in a maple syrup barrel. Photo by Margarett Waterbury, image copyright The Whiskey Wash.

I tasted this whiskey about a year ago, and didn’t particularly care for it. No matter—I’ve heard Tuthilltown Spirits Distillery has made some changes to its production practices recently, so I was looking forward to seeing what impact that might have on the final product.

Upon first sniff, I don’t get much in the way of maple. There’s an initial blast of sawdust followed by cumin, green pepper, glue, and some herbaceous rye notes.

The palate, then, comes as a surprise: tons of Red Hots candies, peppermint stick, and potpourri, with an aggressive smack of oak that leaves the tongue dry. The maple is done with a subtle hand, here—it’s neither viscous nor particularly sweet.

With water, the finish takes on an almost amaro-like quality, bitter and herbaceous. It almost tastes like a bottled cocktail, or a Manhattan made with a particularly bitter vermouth. Drape it over a big ice cube with a little orange peel and boom! You’re a mixologist.

This is definitely an improvement over the previous Hudson Maple Rye, but the flavor still comes across as muddy and a little bit tight, like a room with too much furniture in it.

Vital Stats: 90 proof, bottle 2 of 606. Back label says it contains “Dutchess Private Reserve” aged in a barrel once used to age maple syrup.

The nose opens with some funky, woodshoppy aromas, as well as an herbal character—mint, tomato leaf, wet garden. If I was smelling blind, I’d have pegged it as a rye.

I’d hazard a guess there was plenty of syrup left in that barrel when it was filled, because this is very, very sweet, with lots of true maple flavor and a heavy mouthfeel. Yet towards the finish, there’s a resurgence of young spirit, solventy and vegetal, with flavors like mint, eucalyptus, glue, and solvent. Some bourbons and ryes have qualities that naturally suggest maple syrup—warm baking spices, apple, etc.—but this base spirit seems to move in a different, more herbaceous direction.

Water is a major improvement, toning down the viscosity and helping to remove the wet garden stuff. Now, there’s a lot more classic bourbon character.

I’d never drink this straight, but it might be good over ice, and I can certainly imagine using it in cocktails.

An initial nosing reveals a complex, delicious aroma. At first it’s all sweet and fruity: pannetone, red cherries, maple, banana bread, and vanilla custard, but then there are earthier, mushroomy notes. Oak is present but understated.

Spiced cherry pie is my first impression of the palate, followed quickly by chanterelle mushrooms, yeasted donuts, and a very pleasant barnyard note. A sweet, almost sticky finish has ample maple character, although less than the Taconic expression. I’m surprised by how easy-drinking this is for its high proof – nicely done.

Adding water really amps up the sweetness, perhaps not totally to its benefit. Maybe the structure of the alcohol and tannin is important to balance maple’s inherent sweetness? But this one’s my favorite of the bunch, hands down.

Despite my enthusiasm for the concept, this experiment was a clear demonstration that not all maple-finished whiskeys are a slam-dunk. Viscosity and sweetness can get out of control fast, and the quality of the distillate that goes into the barrel seems to (of course) have an enormous impact. All three of these spirits were tasty, and very different, but I didn’t feel that any of them delivered a home-run on the potential of the genre. My take on the maple-finished whiskey phenomenon? Don’t stop experimenting, distillers!