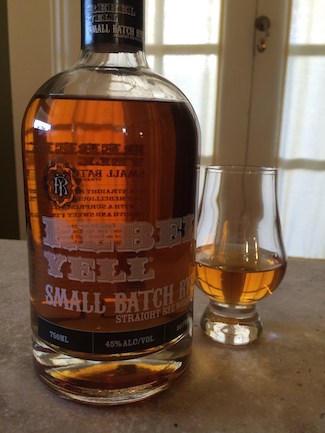 I’m wary when I investigate a whiskey’s own website and find a prominent display of recipes using it. Shouldn’t you want your whiskey to stand on its own?

For Rebel Yell, maybe not so much.

The Rebel Yell brand dates back to 1849. Over years of ownership permutations, the brand was bought by David Sherman Corp. of St. Louis, now known as Luxco. You may know Luxco from some of its other brands, such as Everclear, Arrow, or its pre-made cocktails such as Long Island Iced Tea. It even has a premium bourbon known as Blood Oath we recently had reviewed.

Its Rebel Yell whiskey, meanwhile, has traditionally dwelled on the bottom shelf; however, they’ve recently been expanding into new variants. As such, Rebel Yell got a makeover. Previously supplied in a commercial-looking bottle with an ersatz Western label, Rebel Yell is now housed in a substantial craft-beverage bottle, more high-end than hobo.

The Rebel Yell Small Batch Rye is 90 proof (45% ABV) and made from rye, corn and malt. It’s billed with enough “backbone to stand up to classic cocktails.” Fine. We get it. But a recipe is only as good as its ingredients, so how does it fare on its own?

On appearance, the Rebel Yell is the color of a medium ale. The nose brings light caramel and mellow spice. But on the palate, it’s surprisingly easy drinking, much spicier in taste than nose. It’s young, medium-bodied. Not heavily rye-tasting. It finishes easily, even a little eagerly.

Rebel Yell is aiming to please a crowd, and to do so inoffensively. And really, is that such a bad thing? If this whiskey were a TV show, it would be, maybe…Wings? And we all kind of liked Wings, right? Like for background noise? Or if there was nothing else to do?

The Rebel Yell Small Batch Rye retails around $27 (you can hunt down a bottle through online retailers if you like here), and I’d give it a score of 77, largely for its ability to easily succeed in an ensemble cocktail. It’s simple yet versatile.

P.S. I have to say the recipe on their site for the Rebel Yell looks kind of awesome. Do I have to hand over my tasting license?