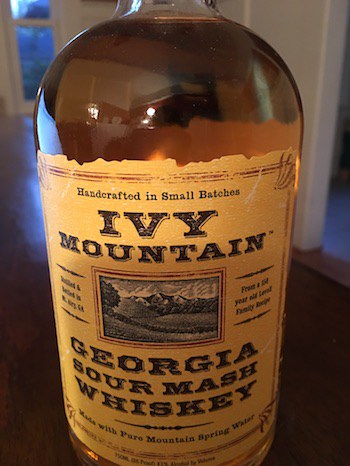 Editor’s Note: The whiskey in this review is labeled as Ivy Mountain, but if you are shopping around for this you may find it under its more recent label of Lovell Bros.

Mt. Airy is located in Habersham County, northwest of Atlanta, Georgia. From the turn of the last century through the 1960s, the Lovell family lived and worked in nearby Batesville…where they also made moonshine. The Lovells shut down their bootlegging in the 1960s, and patriarch Carlos Lovell spent the next 30 years in mountain real estate. But in 2012, he decided to get back into distilling—this time, legally. He and his daughter, Carlene, founded Ivy Mountain Distillery. Their goal: Produce the best sour mash whiskey on the market.

Ivy Mountain has two products out: an aged and an unaged corn whiskey. Confusingly, both products are called “Sour Mash,” with the aged version referred to as “Sour Mash Whiskey.” The Sour Mash version is aged in used oak barrels purchased from Jack Daniel’s and is 86 proof.

Both whiskies use all natural local spring water, of which the Lowells are very proud. The spirits are also apparently made from something called Hickory Cane corn, a type of heirloom corn once popular with Native Americans in regions of the South, and “a handful of barley.” The distillery is said as well to utilize “the same basic copper steam still and boiler design used by the Lovell family thru the early 1960s. The double thumper barrel wash system between the still and the condenser provides a second distillation of the spirit on a single run.”

I want to like this bootstrapping, confident corn whiskey that’s on the super young side, I really do. Let’s give it a go.

Vital stats: A bottle of this will run you about $25.

Color: No clue how much time this spent aging in the JD barrels, but it can’t have been for that long. Extremely pale ecru with a yellowish tinge. More yellow than brown.

Palate: Not terrible. Smooth, easy-drinking. It tasted fiery to my co-taster, but I found it smoother than expected. There’s pride in making this: I respect that. The moonshine DNA is strong in this one. Though it starts smooth, it finishes with a light burn as it makes its way lower. I would drink this…to stay warm?

It tastes like booze. Like sneaky, illicit booze. That’s not all bad. Sometimes there’s a need. I might try one of the recipes from Ivy Mountain’s website, because it’d  make a good mixer—especially in a recipe with lots of ingredients. It’s like the whiskey a high school kid steals from his parents’ liquor cabinet for a party, and when the parents find out, they sort of shrug and say, “At least that’s the one he took.”