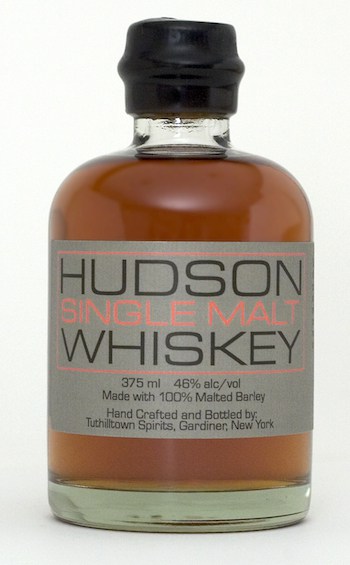 I may be biased, but some of my very best experiences—drinking and otherwise—took place in New York. On top of that, I’ve quite enjoyed many of Tuthilltown Spirits’ other spirits, such as the Hudson Baby Bourbon. Plus, their 375 ml bottles are so short and adorable! They are like the bonsai of the whiskey world. I just want to pat them on their cute little overly waxed caps and put them at the front of my collection where they won’t get lost among the taller trees.

So I was quite excited to try their Hudson Single Malt.

The history of Tuthilltown Spirits is an interesting one: In 2001, the Tuthilltown Gristmill was purchased to open a rock climber’s ranch. However, neighbors’ concerns shelved that plan and led instead to inspiration: building on the 240-year history of the mill to make whiskey. The two granaries were converted into the first whiskey distillery in New York State since Prohibition. Also, up to 90 percent of the raw materials that go into their whiskies are from ten miles of their distillery. Drinking you can feel good about!

Tuthilltown bills their Hudson Single Malt as “an American reinterpretation of traditional Scottish and Irish whiskies.” Retailing for about $43, it’s 92 proof, made from 100 percent malted barley, and aged in small American Oak casks from five months to two years. It’s already won awards, including silver medals at the 2013 Craft Spirits International Competition and the 2013 Los Angeles International Wine & Spirits Competition.

The Hudson Single Malt’s color is liquid gold. It resembles the caramel adorning the top of a flan. On the nose there’s a light sweetness, but on the whole, it’s pretty unobtrusive. Unsurprisingly, it smells of oak–but is blessedly non-peaty. That light profile continues at first taste, with a smooth and almost airy profile. It’s subtly warm, lingers on the tongue and fades at an even rate. There’s a bit of heat, but it dissipates quickly.

All in all, the Hudson Single Malt is a classy experience. It’s as easy as spending time with an old friend—someone, say, you haven’t seen in ages but with whom you always have a great, effortless time. For that reason, I’d give it an 82.

You can hunt down a bottle of Hudson Single Malt for sale through online retailers here.