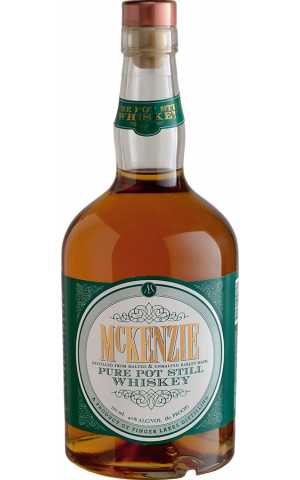 Although separated by more than 3,000 miles of icy Atlantic, the Finger Lakes region of Upstate New York has more in common with Ireland than rolling green hills and a few mailboxes with Kennedy on the side. Thanks to the busy distillers at Finger Lakes Distilling in Burdett, New York, they’re among the only regions in the world producing the unique Pure Pot Still style of whiskey.

Pure Pot Still whiskey (also called ‘Single Pot Still’ as of 2012) is the somewhat confusing term for a style of whiskey once widely produced in Ireland. In response to onerous taxes on malted barley, Irish distillers began combining malt with raw (or “green”) unmalted barley in their mash tuns. This addition gives a spicy, grainy character that tames the sweetness of the malt, and is often used to produce a lighter whiskey.

Triple distilled in copper pot stills, the resulting style became known as Pure Pot Still whiskey, and was common across the Emerald Isle.

Much like single malts, Pure Pot Still whiskies are the product of a single distillery. While a historically popular and important style in Ireland, currently Single Pot Still whiskey is produced only by Irish Distillers at the Midleton Distillery. Popular examples of the category include the Redbreast line and cult favorites Green Spot and Yellow Spot.

In 2012, pressure from U.S. alcohol labeling regulators at the TTB led to changing the designation from Pure Pot Still to Single Pot Still. Today, that name is becoming protected by the European Union, an important step in the continued revitalization of Irish distilling. Stateside, however, the TTB doesn’t seem to be looking as closely these days, as Finger Lakes Distillery’s McKenzie Pure Pot Still Whiskey seems to have slipped by.

Packaged in a handsome, sloped-shoulder bottle with a lucky green label, McKenzie Pure Pot Still Whiskey is bottled at 80 proof, and retails for around $40.

Palate: Rich without being weighty. A very pleasant combination of honey, citrus, chamomile, and nutmeg sits lightly on the palate before transitioning to a surprisingly long and very grainy finish reminiscent of lemon marmalade on buttered toast.

This is a bold-strokes whiskey. It’s neither refined nor complicated, but its flavors are clear and strong and it’s fun to drink. Unpretentious and accessible, McKenzie has that something that keeps you pouring.