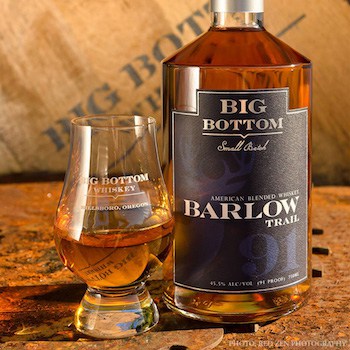 Big Bottom Distillery, as we’ve written in the past, is a Hillsboro, Oregon-based producer that started as a bottler in 2010, and gradually began debuting its own distilled spirits.

Despite the fact that a house-distilled whiskey is still forthcoming (due in 2017, we’ve been told), Big Bottom has kept busy with blending and finishing experiments. As far as whiskey goes, their portfolio has included a range of limited-edition bottlings called the Warehouse Series, most of which were finished in various wine barrels, including casks that once held Zinfandel, Petite Sirah, Mourvèdre, and white port. Another intriguing release we wrote up late in 2015 was the Bourbon Barrel Experiment—the same bourbon finished for two years in one of four different kinds of barrels.

This particular whiskey, Big Bottom Barlow Trail American Blended Whiskey, is a blend of three “well-aged” American whiskeys. It’s named, presumably, for the Barlow Road, the difficult final stretch of the Oregon Trail that crossed the Cascades into the Willamette Valley. The back label notes it was aged at Big Bottom, though it’s unclear whether it was aged entirely at the distillery or just finished there.

There’s no other information about the source or mash bill of those whiskeys, except that it is 100% whiskey (i.e. it doesn’t contain any neutral grain spirits, something the “blended” designation allows for). It’s bottled, as are most of the distillery’s whiskeys, at 91 proof, a numerical shout-out to owner Ted Pappas’s graduating class at The Citadel.

Appearance: Deep gold in the glass.

Nose: Mostly sweet, with major vanilla, caramel, and a quite buttery butterscotch note. Some lighter fruit notes are also there—pear and banana. I get a bitterish wood note, too, not unlike what I imagine chewing on an oak branch dipped in caramel would be like.

Palate: There’s definitely more in the caramel-vanilla area here, but the palate isn’t as sugary as the nose. I notice a substantial ripe cherry note on the mid-palate. The finish is quite pleasant, with loads of warm cinnamon and allspice. The texture is rather oily.

While I’d appreciate a little more information on what went into this whiskey, it’s still quite a well-executed blend. The spice-fueled finish begs to be paired with gingerbread or carrot cake, or perhaps mixed into a Manhattan. It also has to be said that $35 for a whiskey this solid is quite an attractive price.