Whiskey Flavor by Grain, Part I: The Big Four

Since whiskey is mostly universally defined as “spirits distilled from a fermented mash of grain at less than 95% alcohol by volume (190 proof) having the taste, aroma and characteristics generally attributed to whisky and bottled at not less than 40% alcohol by volume (80 proof),” the grains matter a great deal. Grains provide all of the carbohydrates that the yeast consume to produce ethanol. (Except in India.) In the U.S., we even classify our whiskeys by the majority grain type used in the recipe.

Whiskey developed when distilling technology migrated up from the present Middle East and into the northern European regions of modern Great Britain. The application of extracting alcohol via heat was applied to the primary local libation – beer. That beer was made by fermenting malted barley and had a characteristic flavor profile as a result.

Over the successive generations, other grains have been introduced into whiskey-making and distillers learned that selection of grain type, variety and other considerations can greatly impact the final flavor of the whiskey. The last decade has seen a veritable explosion of experimentation with non-traditional, heirloom and uniquely processed grains for whiskey.

Herewith, an examination of the most common grains and their flavor impact on whiskey. (We’ll save the experimental stuff for another post.) 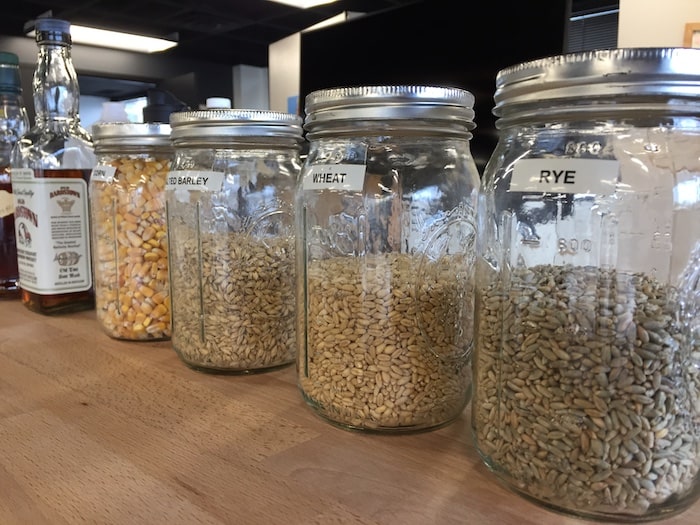 The granddaddy of grains in whiskey is malted barley. Malting is a process done to the barley to make it sprout and in turn produce enzymes which convert the long-chain carbohydrates into simpler sugars which can be fermented by the yeast in alcohol. E.g., no malting, no enzymes, no simple sugars, no alcohol, no whiskey. The vast majority of whiskeys are built on malted barley.

Malted barley produces nutty, smoky, some chocolate or cocoa flavors and a flavor often described as cereal or possibly toast. There’s also a distinctive characteristic simply referred to as malt.

In the mid-1800s, the United Kingdom levied a tax on malted barley in Ireland. Undeterred, Irish distillers shifted their grain recipes to incorporate a substantial portion of unmalted barley to partially evade the tax.

Unmalted barley enhances the grain and cereal qualities of the whiskey and introduces light sharp and sour fruity notes like green apple and lemon.

European whiskey distillers settling in early America switched from barley to rye based on its proclivity to grow well pretty much anywhere.

Rye gives spicy flavors of black and green pepper, anise, mint and, of course, rye bread. Rye imparts a dryness in the mouthfeel that’s sometimes referred to as leathery. Rye can enhance clove and nutmeg flavors from the barrel. If it’s poorly distilled, rye can introduce heavy menthol or camphor flavors into whiskey.

Ubiquitous in most baked goods from bread to bagels to biscuits, wheat is less common in whiskeys, especially as the dominant grain. Several bourbons, including Maker’s Mark and Pappy Van Winkle, use a substantial portion of wheat in order to ‘soften’ the spirit.

Wheat doesn’t provide a substantial set of flavors on its own but does provide a very light bready-ness, some honey and touches of mint. It can provide a gentleness to whiskey and showcases flavors from the other grains or the barrel.

The big daddy of American grains, corn was first inducted into whiskey-making some time in the mid 1700s in the soon-to-be-United States. It’s the required foundation of bourbon and the defacto foundation of much moonshine. The modern distiller’s corn is Yellow Dent #2 which was originally developed in the mid-1800s and aggressively hybridized in the 1920s and 1930s to become the ultra-high-yield strains used today.

There’s a lot of confusion about corn in whiskey and it’s often mis-credited for the sweetness, vanilla and maple syrup notes in bourbon. No grain actually provides sugar content in whiskey – sugar doesn’t pass through distillation – but because YD#2 corn isn’t a strong source of flavors in and of itself, the oak sugars and vanillins from that new, charred oak barrel shine through.

Corn’s role in whiskey is to provide cheap carbohydrates for the yeast to convert into ethanol. Ideally, very little flavor comes from the corn itself. Heavy corn notes – especially burnt corn oil, popcorn or “movie theater butter” – are often considered faults in bourbon. This is why bourbon recipes always include a proportion of the “flavoring grains” of barley, rye and/or wheat. Corn also introduces compounds that can heighten the ethanol burn of whiskey which bourbon distillers must be vigilant to remove either during distillation, maturation or filtration.

These grains – barley (malted or unmalted), rye, wheat and corn – represent the vast majority of grains used in whiskey. Whiskeys within North America – US and Canada – are typically a blend of three or four grains, while whiskeys outside America are commonly based on barley. (Of course, just like the spelling of whiskey with or without the ‘e’, this rule-of-thumb has numerous exceptions.)

So when you’re tasting your favorite whiskeys or reviewing tasting notes, remember that the choice of grain has a major influence on the flavors.

Tim Knittel is a professional Bourbon educator and writer based in Lexington, KY. He has over a decade of experience inside and outside of distilleries and holds the titles of Executive Bourbon Steward-in-Residence at The Kentucky Castle and Adjunct Professor of Tourism, Event Management and Bourbon Studies at Midway University....