Like Bulleit bourbon, but wish it came in a smoked expression? Can’t figure out what to do with that mostly-full bottle of Crown Royale left behind after your father-in-law visited last year? Portland’s Time and Oak has got you covered.

This eight-month-old Portland-based startup has invented a patented product called“Whiskey Elements” that claims to be able to transform your bottom shelf (or better) whiskey, making it smoother, easier to drink, and even adding flavor notes like spice, smoke, or oak vanillin. Sold under the tagline “whiskey your way,” Time and Oak is finally giving you the chance to backseat drive on your favorite spirits.

Made from new precision-cut and toasted American White Oak in a high-tech, laser-powered manufacturing facility right here in Portland, Whiskey Elements looks a little bit like a Jenga piece that had a terrible accident with a julienne slicer. They come in three flavors: Signature (trusty toasted American Oak), Wine Cask (soaked in a proprietary blend of port and red wine), and Smoke (infused with liquid smoke). 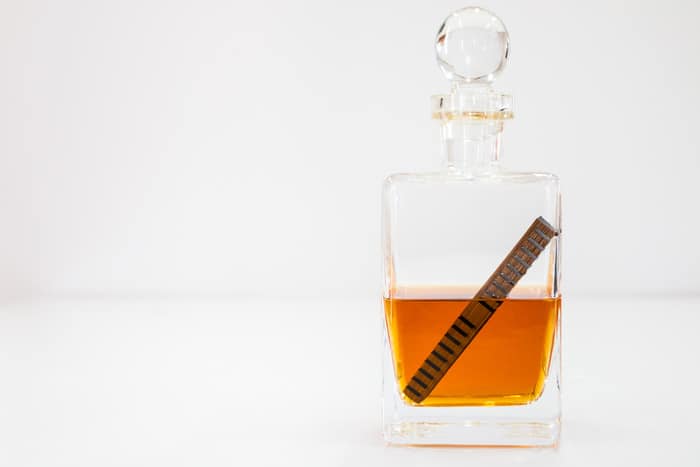 The concept is simple: more exposure to wood = more of those vanilla-caramel notes we associate with the flavor of high-end whiskey. The shape of the Element is meant to increase surface area exposure to the whiskey and encourage capillary action in the wood, mimicking the process that takes place in the barrel and creating that rapid-aging effect.

Although Elements are definitely marketed for whiskey, founders Michael and Josh report that consumers have started using them to modify tequila, gin, or even premixed cocktails. Bars and restaurants have even begun swapping space-hogging (and heavy!) barrels for Elements in their cocktail aging programs, a fun trick I’m excited to try at home.

That said, there’s something undeniably gimmicky about the Whiskey Element. Call me a purist, but I’m skeptical. How are Elements different than the oak cubes you can buy at any homebrew store for pennies? Does every whiskey really benefit from more oak exposure? Isn’t it worth challenging our palettes to enjoy a broader range of flavor profiles than the insipid butterscotch sundae of so many heavily aged whiskeys? If this simple technology is so effective, why aren’t distilleries scrapping their barreling programs and using the same strategy?

It would be a remarkable thing if a handful of entrepreneurs stumbled across an aging format that millions of dollars of spirits industry R&D had somehow overlooked (something Cleveland Whiskey has tried, for example). But it is – technically – possible. Come back next week, when we review Whiskey Elements to see how they stack up in practice.

In the meantime, if you’re intrigued, you can pick up Whiskey Elements online at their website or at several local Portland retailers, including Kitchen Kaboodle, the Portland Saturday Market, and OLCC liquor stores.