The name of the whiskey and the distillery pay homage to Nathan “Nearest” Green, the “first known African-American master distiller,” according to a prepared statement from the company. Green was an enslaved man who is said to have taught Jack Daniel to make whiskey. When Daniel opened his own distillery, after the Civil War, he hired Green as his first master distiller. Although Jack Daniel’s, the company, has started telling Green’s story in the last few years, Nearest Green Distillery has no relationship to the Lynchburg distiller.

The new facility will be as much a visitor center as a distillery, featuring a Tennessee Walking Horse experience (the site is a former horse farm) where visitors can learn the history of the breed and see a stable of championship horses, a tasting bar, an open-to-the-public bottling house, and a so-called hard hat tour, where visitors will be able to see the areas still under construction, including the Heritage Hall, which will house a collection of Tennessee inventions like NASCAR, miniature golf, country music, and Mountain Dew. 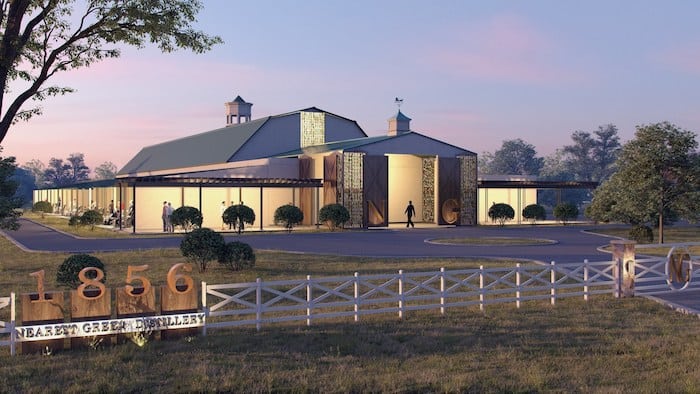 Fawn Weaver, the co-founder and CEO of Uncle Nearest, is also the writer who helped prove Green’s importance in Tennessee whiskey history. “When I went to write the invitations for the distillery opening, tears began to stream down my face,” she said. “I’m not a person who cries often, but something about this history just chokes me up. When I wrote the opening line, ‘If Nearest Green could have owned his own distillery, would he have?’… The Nearest Green Distillery is his legacy and that of his descendants. Being able to bring that to life, quite frankly, still blows my mind.”

The design of the visitor experience, meanwhile, was overseen by Peggy Noe Stevens, the first female master bourbon taster, founder of Bourbon Women, and co-founder of the Kentucky Bourbon Trail.

Uncle Nearest Premium Whiskey, which up to this point has been made at a distiller in Nashville, comes in three variations: an 11-year-old single-barrel bottling, a 7-year-old expression and the core premium aged expression that is a blend of 8-11 year old whiskeys.