Templeton Rye Begins Construction Of Its Own, Honest To Goodness Distillery

The recent trend we’ve seen in which well known non-distilling producers bring product to market that’s actually their own in-house whiskey shows no signs of letting up. Now, Templeton Rye out of Iowa has begun construction of its own distillery, and soon thereafter should have the ability to make its own whiskey, rather than selling entirely sourced product.

Templeton Rye, the distillery says, will spend at least 18 months and some $26 million in expansion and renovation of its existing operations. Plans call for a 34,500 square foot distillery which, when producing at capacity, will be able to make 500,000 proof gallons of rye whiskey annually, to be built alongside an aging warehouse which can hold 40,000 barrels. 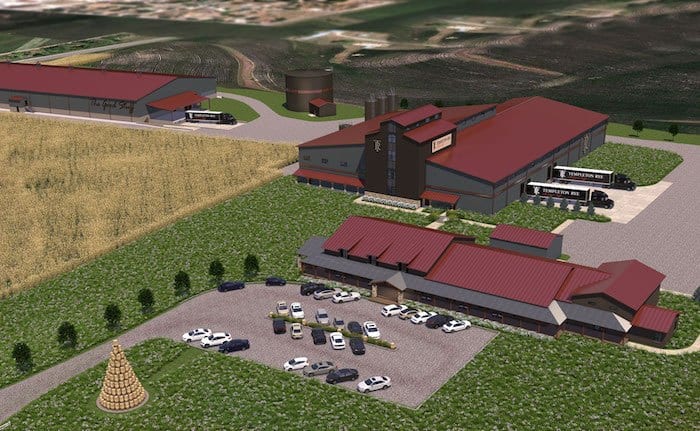 As part of the new facility, it is said, production tours will be offered that give visitors a bird’s eye view of the entire production process. The new distillery and warehouse will be built at Templeton Rye’s current 20-acre facility in Templeton, Iowa, which is a way for them reportedly to keep with a long standing tradition of giving back to their namesake community.

“We’re moving full-steam ahead,” said Keith Kerkhoff, Templeton Rye co-founder whose grandfather was an area bootlegger, in a prepared statement. “Our company is laser-focused on bringing the history and spirit of the community of Templeton, Iowa, to life through Templeton Rye whiskey. We’re proud to share ‘The Good Stuff’ with whiskey lovers around the Hawkeye State and the country.”

Templeton Rye, even as it builds out its new distillery, continues to put out to market its MGP sourced expressions. These include Templeton Rye 6, which marked the company’s first new product in a decade. Aged six years in new American oak barrels, this release of Templeton Rye has a 91.5 proof (compared to the signature product’s 80 proof). In late October, coinciding with the company’s 10-year anniversary, they also introduced a limited release: Templeton Rye Special Reserve.

For those who don’t know the history of this brand, here’s the short story version from the brand minus information on the now infamous lawsuit settlement around labeling practices:

In October 2006, 68 barrels of Templeton Rye completed their four-year aging process, and became legally available on shelves in Iowa. The company expanded its plant from a small building, adding 11,000 square feet in 2007 for a more efficient production process. An automated bottling line went online in 2008, providing a quicker, more efficient method of bottling.

Templeton Rye uses a mash made up of 95% rye from MGP (formerly Lawrenceburg Distillers of Indiana) as its foundation. The distilled rye whiskey is brought to Templeton, Iowa, where it is combined with Templeton Rye’s proprietary formula and local purified water. The whiskey is then bottled in the production facility in Templeton.