The Templeton Rye Whiskey brand, as it continues to grow post distillery opening last year, has by now barreled a fair amount of its own Iowa-made whiskey. It is said by the distillery the first batches of it won’t be available for consumption until 2022 so, for the time being, we continue to experience their sourced product. One of the latest of these is a new rye whiskey that’s been finished in a maple cask.

The new Templeton Rye Maple Cask Finish Whiskey, according to those behind it, is the first limited-edition expression in their Barrel Finish Series. This whiskey, done in conjunction with Wood’s Vermont Syrup Company, came about after “fresh maple syrup was produced and shipped from the Vermont farm to the Iowa distillery, where the Templeton team then seasoned 80 empty Templeton barrels with the premium Maple Syrup. To ensure the required influence on the wood, the barrels were then turned daily for a two-month period to allow the syrup to soak into the wood staves and maximize the flavors that would later be imparted into the whiskey during the secondary maturation period.

“After the maple syrup is removed, the barrels are then filled with Templeton Straight Rye Whiskey and left for an additional maturation period of two months. The resulting expression is a whiskey with new, elegant notes of dark chocolate enhanced by the time in maple syrup barrels.” 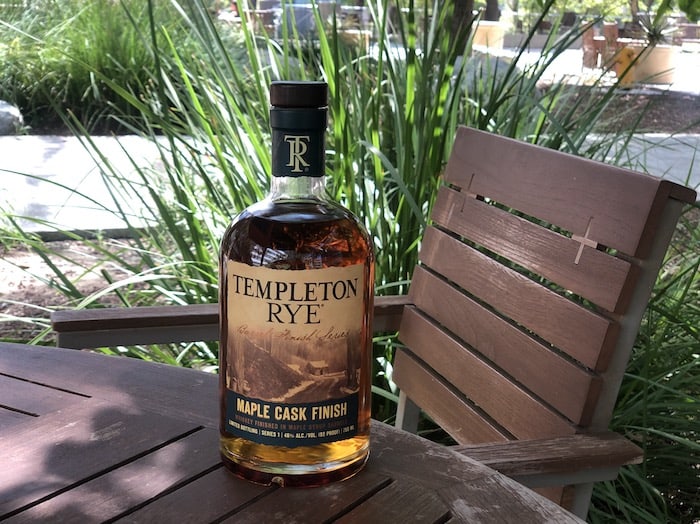 “We were delighted to work with the family at Wood’s Vermont Syrup Company for our Maple Cash Finish Rye Whiskey, the first limited-edition expression in our Barrel Finish Series,” said Tim Grimes, Brand Ambassador of Templeton Rye, in a prepared statement. “As they were the first company in the Northeast to ever barrel age Maple Syrup and have that process down to perfection, we felt they were the perfect fit for us on this project.”

As it stands now plans call for the Templeton Rye Maple Cask Finish Whiskey, bottled at 46% ABV, to be made available in limited quantities for a price of around $35 per 750 ml bottle.

79
Shares
852
Views
Share on FacebookShare on TwitterGet Our Newsletter
Get The Glenlivet 18 Year Old at ReserveBar. Shop now!