The McMenamins brew pub chain out of the Pacific Northwest, as we’ve chronicled over the years, has annual releases of its Devils Bit whiskeys tied to its regular St. Patrick’s Day celebrations. 2021 is certainly no exception to this standard as, for the first time, they are releasing as well a club exclusive 750 ml bottling.

The more regular McMenamins Devils Bit whiskey, according to those behind it, is aged for six years in toasted, light charred oak barrels after having been distilled from a mash bill of malted barley. It is then finished for an additional time in used sherry casks. Bottled at 46% ABV, it is being made available in limited numbers for $24 per 200 ml bottle. 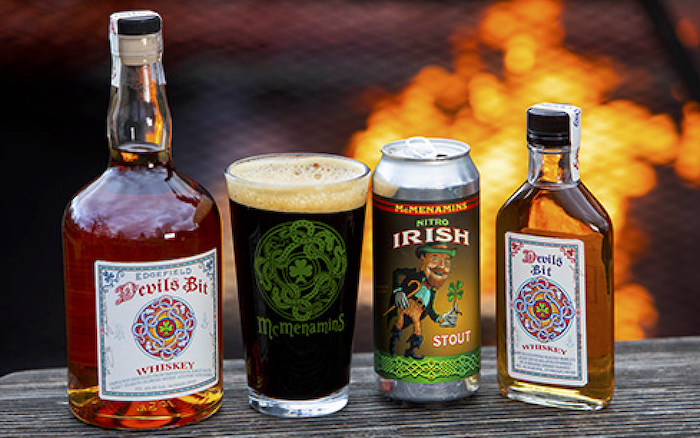 Official tasting notes for this release make mention “the nose is full of baking bread notes, toasty oak and butterscotch. The palate is warm and easy, with a gentle finish. A wave of buttery toffee comes through, followed by pepper spice and toast.”

Joining this offering is a 750 ml bottling of Devils Bit that’s been crafted especially for members of the McMenamins Whiskey Club. This edition is described as a “true Irish style-whiskey.” Its mash bill consists of malted barley imported from the United Kingdom, and the water used for it is said to be “akin to Dublin’s for true Irish flavor.” What this means from a practical sense is water comes from its Edgefield distillery, and is treated with brewing salts to “match the specifications of Dublin’s.”

“Since the wash – the first product of fermentation from the mash – is over 90% water, water is crucial to making a wash brewed in Troutdale taste and smell like a wash brewed in Dublin,” noted the distillery team.

After fermentation, the whiskey was triple distilled in pot stills and allowed to age for seven years in a combination of “used port and oloroso sherry barrels, purchased specifically for this purpose.” Official tasting notes indicate “the delicate brandy-like aroma of this Devils Bit captures your attention with notes of barley, dark cherries and grape skin, then the palate brings you back to firm notes of barley malt.

“From there the whiskey takes you on a tour of flavors – almonds, butterscotch and light citrus – before finishing long and sweet.”

The McMenamins Whiskey Club Devil’s Bit is bottled at 90 proof and prices for $90.