The Olds: A Whiskey History and Tasting Exploration

On the heels of my Old Forester review and the interest in all things “old” in the American whiskey scene, I’ve taken it upon myself to explore the culture and history of “The Olds”— a historic part of the American whiskey legacy that today is increasingly forgotten, marginalized or kitschily revamped. As it currently stands, the remaining Olds tend to fit into one of three categories: the bottom-shelf bar favorite, the so-bad-it’s-good-again, and the old-school highbrow.

The hipsterization of The Olds, specifically those owned by Beam-Suntory (Old Crow, Old Overholt, and Old Grand-Dad), rests upon a collection of tired advertising tropes leaned on again and again by the alcohol industry. The Olds follow in the footsteps of hipster icons PBR and Dos Equis’ “Most Interesting Man in the World” by relying on nostalgia, retro packaging, and retro sexism to drive product sales.

But at one time, the Olds were quite contemporary. Beam-Suntory’s Olds rest within a long American tradition of distilling that can be traced all the way back to the famous Bourbon County, Kentucky: the heart and spiritual home of bourbon production. 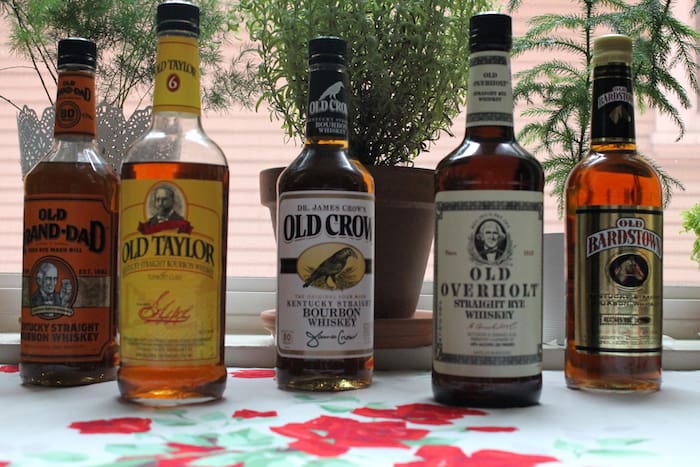 The birth of whiskey in America was as much a means of agricultural preservation as it was a rollicking good time. American whiskey writer Chuck Cowdery outlines the rise of bourbon production in his seminal work Bourbon, Straight. A story not like any other regarding brewing or distilling, the story of American corn-based bourbon whiskey overtaking in popularity similar rye-based whiskies initially being produced in the Northeast US is one based in agricultural necessity.

Farmers across the country, and more importantly, in the American South, lacked access to long-term storage or reliable methods of transporting their corn crop to far-flung markets. Cowdery notes that while it was not typical for corn farmers to ship their grain outside of their own reach, turning their corn into whiskey added value and made it much easier to transport for sale. It was this style of Southern corn whiskey that traveled outside of its home and made a name for Bourbon County whiskey.

One significant takeaway from Cowdery’s book is the history of the use of “old” in American whiskey naming. Hailing back to the formation of the states themselves, bourbon’s identity was, in many ways, as undefined as the state’s legal boundaries. County lines were being drawn and re-drawn in the late 1700’s as Kentucky formed. At the same time, trade routes were being defined, and American whiskey was becoming more popular.

Kentucky itself wasn’t officially a state until June 1st, 1792. After this event, the existing Bourbon County was divided into many smaller counties, including the more modestly sized Bourbon County we know today. This meant that all of the whiskey being distributed from what had been known as Bourbon County for some time was still being advertised as being from Bourbon County, or rather “Old” Bourbon County, as a means of keeping with positive quality associations. The region had developed a reputation for its Bourbon whiskey, and many drinkers preferred it to other whiskeys – or so the lore goes.

Jump forward to the closing of the 1960’s: the American whiskey industry has survived Prohibition and two World Wars, and has now had a few decades of uninterrupted production time to solidify untouched. The 1960’s saw a rise in cocktail culture and blended whiskies; drinkers wanted lower proof drinks that tasted “smooth.”

However, the 1970’s and 1980’s saw the rapid decline of all things “old” in the whiskey world – and in general. With young people being enticed into the vodka market by highly successful advertising campaigns, including Absolut’s famous collaboration with Andy Warhol in 1986, whiskey had a competitor in vodka that it never expected. During this vodka era, many Olds went away, never to return. However, the mainstay Olds we know today still remain, and those who control them seem to be putting in some effort to revamp their collective image.

The Olds, as Beam-Suntory currently presents them, are just those three that famously survived the 1980’s whiskey crisis: Old Crow, Old Grand-Dad, and Old Overholt. Unlike many brands that readjusted to cater to a population who valued Scotch, these three Olds seem to have simply weathered the storm as they were. While the reformation and reformulation of many American whiskey offerings during the 1990’s incorporated many cues from the Scotch whisky industry, including exclusive offerings, single batch and barrel releases, and whiskies aged longer, The Olds remained unchanged. Now with the slight push by Beam-Suntory to modernize the popular trio, a re-examination of them seems timely.

The Olds: A Tasting

We were able to round up the following “Olds” for this tasting:

All of these I had either seen or sampled before, mostly when partaking in well cocktails in a fashion I didn’t intend to remember. That being said, I’m hard pressed to find a time when I can recall drinking any of these Olds neat, let alone remember any defining characteristics of any of them I’d drank in the past.

After having the chance to taste and ponder then in the same fashion that I usually do when reviewing spirits, I am pleasantly surprised. Although some were downright undrinkable, a few were not just drinkable, but quaffable. 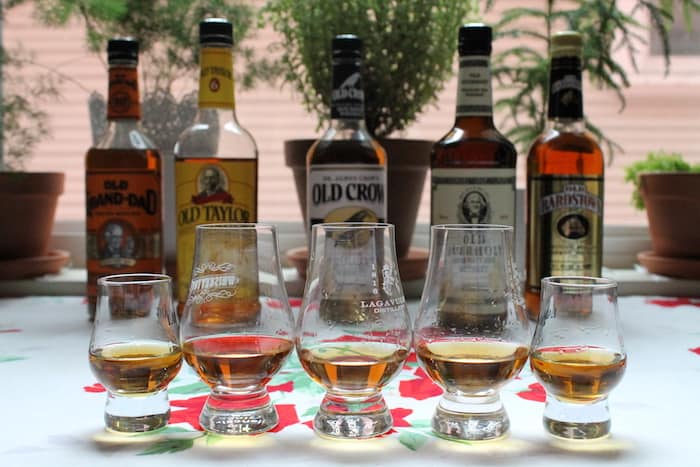 Going from from worst to best, here is my roundup and rating (from 1 to 5, with 1 being undrinkable even in dire circumstances, and 5 being a perfectly respectable whiskey to share with friends without shame) of these whiskies.

Old Taylor
I made the mistake of assuming that since Old Taylor is related to Colonel E.H. Taylor, that it would be an excellent bourbon; boy, was I wrong. Old Taylor smells like potpourri with sour milk poured on it at first, and after opening settles into a nail polish and fake butterscotch scent that proves no more appealing than the previous milky potpourri. Similarly, on the palate the whiskey itself tastes stale, and has a certain blood and sand (no, not the delicious cocktail–actual blood and actual sand) tang to it.

The iron and grit of Old Taylor may sound tough in theory, but in reality I found the whiskey to be undrinkable.

Old Taylor: a score of 1

Old Overholt
As a rye whiskey, Old Overholt is inherently slightly different than the other Olds I tasted. The dark brown bottle that this rye lives in absolutely plays a part in visual trickery that makes it easier to believe that it is of higher quality than it really is. On the nose, Old Overholt is quite sweet, with nuttiness and menthol notes. On the palate, the whiskey is overwhelmingly peppery, with some heat and follow-through from the nuttiness and sugar on the nose. The upside of Old Overholt is that it is a very cheap intro rye that lacks any form of bitterness, the downside of Old Overholt is that it’s not much more than a wall of pepper that’s frankly–pretty flat.

A good rye for introductory rye drinkers with little money to spare. A bad rye for anyone who is seriously invested in drinking middling to quality rye whiskey.

Old Overholt: a score of 2

Old Grand-Dad
Old Grand-Dad is hard to miss, with its signature orange and gold label and kitschy design. A bourbon that American whiskey expert Chuck Cowdery calls “often overlooked but…an essential part of any whiskey fan’s education” due to its classic recipe and role in whiskey history, along with many other Olds. With about twice as much rye in its mash bill than other bourbons, Old Grand-Dad has something different to offer. Grassy and fresh on the nose, the whiskey also carries notes of yeast and oats. After opening, caramel and vanilla take their place, but without the cloying sweetness of many cheaper bourbons. On the palate, mint chocolate, orange oil, and floral notes make Old Grand-Dad a very approachable dram. Spice and slight bitterness marry with salt to round out the whiskey. The finish is soft, with corn flour and subtle sweetness.

Old Grand-Dad is a whiskey I would recommend to someone looking a middle-of-the-road bourbon on the cheap; neither too spicy nor too sweet, Old Grand-Dad is the Goldilocks of the Olds.

Old Grand-Dad: a score of 3

Old Crow
Old Crow, more than any other Old boasts a long and silly Wikipedia page full of its lore. Although both floral and sour on the nose like Old Taylor, Old Crow actually manages to pull this combination off. Green apple and creamed corn define the palate, backed by a spicy bite and caramel notes. A slight metallic tinge on the palate haunts, but certainly doesn’t ruin the spirit. With heavy caramel and warm corn bread on the finish, Old Crow goes down smooth.

Old Crow, in my mind, remains the king of the well bourbons and I will not hesitate to spend $3 on it when I’m out and feeling as broke as the Millennial I am.

Old Bardstown
Old Bardstown, with its $15 price tag and golden label complete with horse head, was the biggest surprise in tasting the Olds. Smelling of lilacs, roasted corn, and sweet cream butter on the nose, Old Bardstown smells like a summer picnic. After opening, super rich buttery caramel pops out. On the palate, the whiskey is incredibly rich and buttery, even pound-cakey. Fatty and a little spicy, Old Bardstown brings a richness unlike any of the other Olds.

With a lingering spice and buttercream frosting finish, Old Bardstown is strangely enough, a real treat.

Old Bardstown: a score of 5