The Westland American single malt distillery out of Seattle, Washington, has on its hands a new limited edition whiskey that’s said to harken to the 1800s Klondike Gold Rush and the spirit of the Pacific Northwest in general. It is being released in conjunction with a a collection of new branded outdoor goods created by Filson, another Seattle based retailer.

The new Westland Coldfoot Whiskey, according to those behind it, commemorates the “Klondike Gold Rush.” This legendary era, which occurred during the late 1800s, “consumed the world and captured the imaginations of a generation. Seattle served as the starting and ending point for a harrowing journey north and back—an expedition that gave rise not only to enduring outdoor outfitter brands like Filson, but also an intrinsic pioneering mentality that still defines the Pacific Northwest to this day.

“The vast majority of prospectors took the well-trodden path to the boomtown of Dawson, Alaska. But not all followed the herd. A small group of ambitious prospectors followed a different path that headed even further north, into even more rugged territory to a camp called Coldfoot. Of the 2,000 “green hands” that set out on the stampede, only 200 stuck it out to stake a claim there. The rest got ‘cold feet.'” 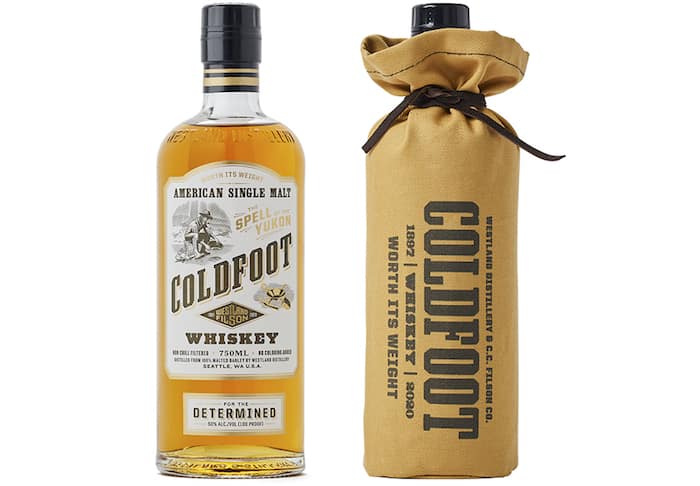 From a practical perspective, what you have here is an American single malt whiskey that’s designed to reflect the emergence of the Westland in-house style. It is a five year old offering, made from heavily peated malt barley, that’s been aged in a combination of first fill ex-bourbon, new American oak and Oloroso butt casks.

As part of the tie-in, Filson is releasing a collection of cobranded T-shirts, caps, stickers, a pullover hoodie, and a stoneware shot glass, each with custom graphics tied to folklore behind Coldfoot. Prices will range for these products from $3 to $145.

“Westland and Filson are cut from the same cloth,” said Matt Hofmann, Co-Founder and Master Distiller at Westland, in a prepared statement. “Both brands make real things in time-honored ways with an integrity that comes from understanding the essence of the Pacific Northwest at an elemental level. We’ve been long-time friends and partners and it’s great to finally collaborate to create something as exciting as Coldfoot.”

Plans call for the first edition of Westland Coldfoot, bottled at 50% ABV, to price around $100 per 750 ml bottle, with just 978 bottles in total being released. The whiskey will be released at the distillery on February 20, and also for sale online. You’ll find below some some official tasting notes as well.

17
Shares
704
Views
Share on FacebookShare on TwitterGet Our Newsletter
Get The Macallan® Rare Cask at ReserveBar. Shop now!