Editor’s Note: There are many bars in America and beyond where you can get whiskey, but only so many which have a whiskey collection that goes well beyond the ordinary. We plan to highlight these legendary whiskey bars in an occasional series, starting out with Seattle’s famous Canon. Have a suggestion for a bar for us to check out? Drop us a line on our contact page.

Tucked into a row of businesses on the now-bustling 12th Avenue in Seattle, Washington’s Capitol Hill neighborhood, Canon Whiskey and Bitters Emporium has quickly become a mecca for spirit lovers who can choose from one of the largest whiskey selections in the entire western hemisphere. Patrons have to access Canon’s menu from a leather-bound iPad just to see everything the bar has to offer.

Jamie Boudreau, the captain of the ship and brains behind the program, informed me in a recent interview he never anticipated getting so busy so fast. At the time Canon opened in the summer of 2011, the surrounding area was “iffy,” and the whole business plan was based on “trying to figure out how to get people to come to us.”

Fortunately for Boudreau, they never had to implement most of the ideas. Indeed, it is often a wait to grab a seat at the cozy establishment, but well worth it. In fact, even with the walls covered in alcohol requiring a library ladder, it makes you wonder where they stash everything. 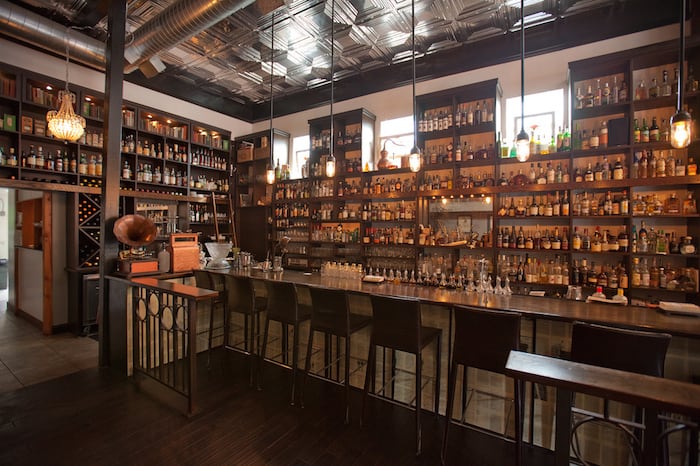 When it comes to curating such an impressive collection of whiskeys and spirits, Boudreau said there’s no particular formula, just the same way anyone else would build a collection. “One is constantly on the hunt for new bottles and you keep everything organized,” said Boudreau. And keeping that library in order is no small feat: the spirit list [PDF], also known as “The Captain’s List,” is 146 electronic pages at last count, with 118 of those being whiskey.

Canon is also one of the few venues allowed to sell the Scotch Malt Whiskey Society collection. According to the menu, the distilleries of the bottles listed are not mentioned (all of which are single cask, single malt bottlings). Everything Canon knows about each bottle is recorded on the list, but if the information is too lacking for the customer, they can “contact the Society and perhaps they will be willing to offer more information.”

Curious how one even begins to select a whiskey from the menu, Boudreau said the bartender will usually ask what they’ve had in the past and really enjoyed and go from there. The next question, of course, is what would be their budget because some of Canon’s offerings are quite pricey. A Jim Beam 1919 telephone, for example, will run you $725 for a dram. Or if you’re feeling really spendy, you can get a Westover Maryland rye from the 1880s for a mere $1,225. It completely depends on the experience each customer wants to have (there are plenty of affordable options as well).

Though often referred to as a whiskey bar, Boudreau insists that Canon is a restaurant that just happens to carry around 3,500 labels, of which about 2,500 are whiskeys. They operate as a restaurant and have a deep selection of everything, including wine. It should also be noted that Canon’s cocktail program is one of the most renowned in the country – the menu is constantly updated (about every two months) and no stone goes unturned in their creations.

Boudreau, who enjoys a whiskey with good balance, depth of flavor and a long finish, is cautious about the craft whiskey eruption in the U.S. “I honestly wish that 98% of the new distilleries would either age the whiskey properly and/or properly label where the whiskey was actually distilled if they didn’t make it themselves. Unfortunately there is a lot of bad whiskey out there now that the boom has happened.”

So expect to find nothing less than properly crafted spirits at Boudreau’s intimate spot. And when you go, don’t forget your reading spectacles.