Top flight rye whiskey distillery WhistlePig, with its FarmStock rye whiskey series, has been slowly moving towards the release of an expression that contains a majority of aged spirit made from in-house produced whiskey. The distilling team there has now hit this goal with its third release in this line up.

WhistlePig FarmStock Rye Crop 003, according to those behind it, is made up from a mash bill comprising 52% of WhistlePig’s 3-year-old rye whiskey, blended with 31% 6-year aged whiskey and 17% 10-year aged whiskey from Alberta, Canada. It is the final release in the FarmStock series, and was hand bottled in the distillery’s Vermont barn at 86 proof.

“This Triple Terroir whiskey is born of rye grain from our Farm, distilled and proofed in our stillhouse barn with our well water, and aged in custom Vermont White Oak barrels crafted using locally and sustainably sourced trees,” said Pete Lynch, WhistlePig’s Master Blender, in a prepared statement. “It’s our absolute pleasure to introduce the next version of FarmStock Rye, particularly as this 3rd edition contains over 50% whiskey distilled on the farm. With this release, we’re able to cement not only Dave Pickerell’s dream, but his legacy as well, by bringing the whiskey he laid down years ago to life.” 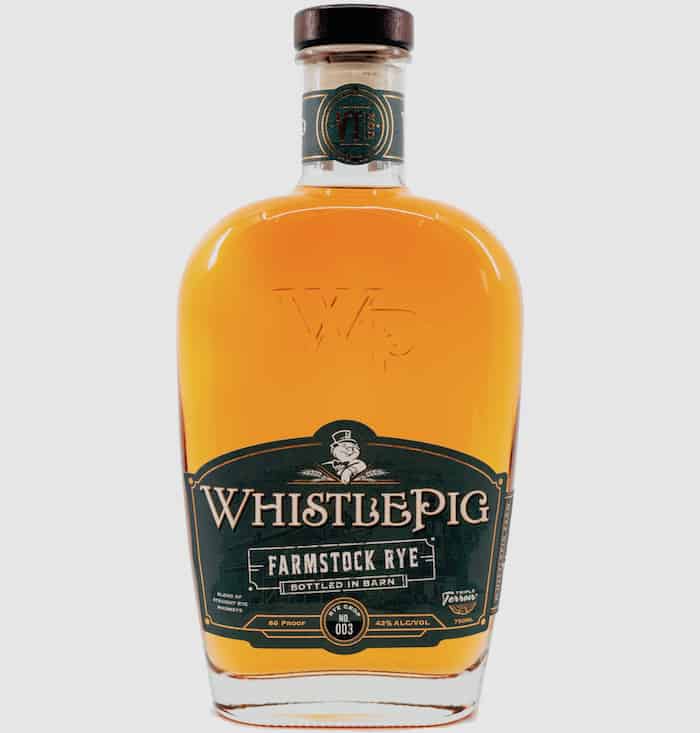 “Each annual release of FarmStock Rye not only adds dimension to the whiskey – as the farm continues to adapt and modernize – it also adds a new chapter to the WhistlePig story,” added Jeff Kozak, CEO, of WhistlePig. “While FarmStock Rye Crop 003 completes the Rye trilogy, we’re excited to continue showcasing our farm based innovation, leading not only the rye resurgence but the broader craft whiskey revival.”

As it stands now plans call for this WhistlePig whiskey to be priced at around $73 per 750 ml bottle. Limited official tasting notes suggest it is “sweet and aromatic, with vanilla, maraschino, roasted chestnuts and hints of cigar box. Upon tasting, you’ll experience oak, toffee and baking spices followed by soft notes of crème brûlée and rose petals.”