Is Pabst Blue Ribbon Set To Become A New Whiskey?

Pabst Brewing, otherwise known to most of us as Pabst Blue Ribbon, or PBR, looks like it may be throwing its hat into the craft whiskey arena. Teaming up with New Holland Brewing, who has its own distilling arm, the well loved American lager brand is set to potentially debut a Pabst Blue Ribbon Whiskey perhaps sometime this year.

The as yet unveiled whiskey, first reported upon by MiBiz, would be under the Pabst label but would be contract distilled by New Holland Brewing, a well known brewery which also makes a line of respectable whiskeys. Both Pabst and New Holland are said to be keeping information minimal at this point, with Pabst officials telling MiBiz they aren’t quite ready to share full details at this time, but that it “is quite a big thing for the brand.” 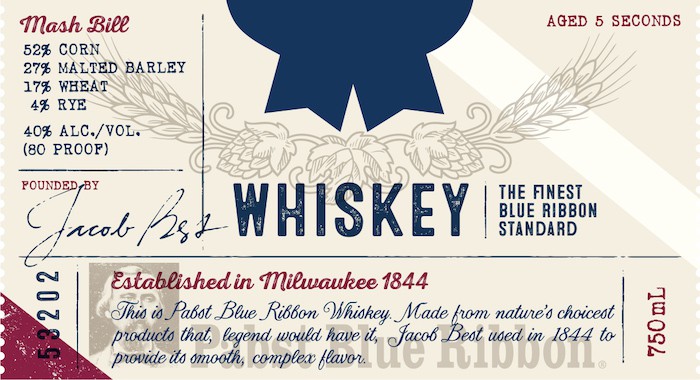 The Pabst Blue Ribbon Whiskey label, as you can see above, is available for public viewing through the TTB’s COLA registry, which is where labels such as this appear after they are approved for distilleries to make use of by the federal government. It is not always a forgone conclusion that the product will actually be made despite the fact a label appears here, however, but it seems likely Pabst will be heading in this direction given their exchange with MiBiz.

As for what the labels reveal at this point, we know this will have a mash bill that’s 52% corn, 27% malted barley, 17% wheat and 4% rye. It will be 80 proof, or 40% ABV, and is said to have been aged just “5 seconds.” Side labeling also reveals “only the finest ingredients have been carefully mashed, fermented, and distilled to create our most unique spirit.” Back labeling states “distilled and bottled by Pabst Brewing Company Holland, MI.”

The TTB is classifying the product as a general “whisky,” meaning it meets the general characteristics applied to this spirit type. Little else is known about it at this time, including whether or not it was distilled from a beer wash that’s reflective of the PBR style. Still, for lovers of this beer brand, the idea of a PBR whiskey shot accompanied by a PBR beer will be a combo many will likely want to order at a bar, making this new spirit a run away winner if it actually becomes a reality.