Is Jack Daniel’s The #1 Selling Whiskey In The World?

As I read the press release from Jack Daniel’s about the resignation of Jeff Arnett, I thought they had buried the lede. There, at the end of the second paragraph, I saw it: “Jack Daniel’s is the #1 selling whiskey in the world.”

This is a big deal because the #1 spot has long been held, proudly, by Johnnie Walker. As any whiskey drinker knows, Jack Daniel’s and Johnnie Walker are completely different products, connected only by the fact that both are classified as whiskey (or whisky). They are, however, as segment leaders, avatars of each nation’s whiskey industry. As Jack and Johnnie go, so goes the business. World wide, scotch still outsells American whiskey about four to one, but that ratio has been narrowing steadily for decades. 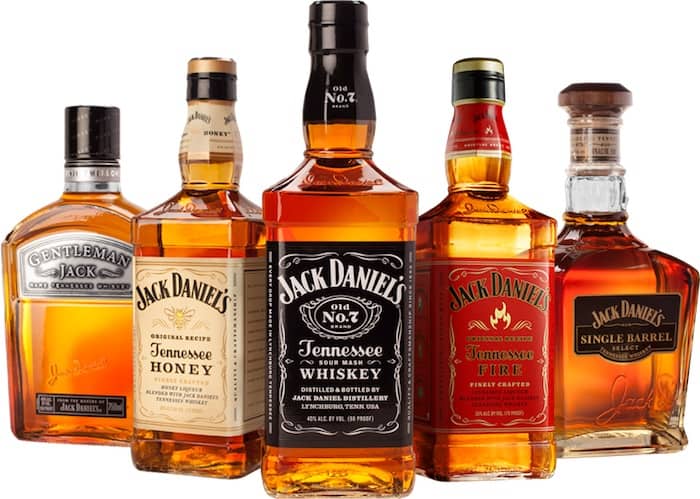 Some of the Jack Daniel’s whiskeys (image via Brown-Forman)

In 2014, when the Tennessee legislature was considering amending or repealing its new Tennessee Whiskey law, I testified before the committee looking into the matter. I was there at the invitation of the newly-formed Tennessee Distillers Guild, most of whose members supported the existing law, which for the first time formally defined Tennessee whiskey as (in effect) straight bourbon that has been filtered through maple charcoal before aging.

Those wanting to dilute or discard the law were led by Diageo, owner of Tennessee’s George Dickel Distillery, and not coincidentally also the owner of Johnnie Walker. Diageo and its supporters offered a variety of reasons for opposing the law. They said it was unfair to small distillers, too narrow, and stifled creativity. I told lawmakers the real reason. “Right now, Diageo’s Johnnie Walker and Brown-Forman’s Jack Daniel’s are battling for the title of world’s number one whiskey, a title long held by Johnnie Walker,” I told them. “Most industry analysts believe it is only a matter of time before Jack overtakes Johnnie. In emerging markets, where no one knows either, that title is worth millions, so anything Diageo can do to slow Jack down, they will do it, and that is why they are doing this.”

That sent the Diageo folks in the hearing room scrambling, but no one has ever denied my claim.

Earlier that year, the drinks research firm IWSR reported that the principal expression of the Jack Daniel’s line, black label “Old No. 7,” had passed Johnnie Walker Red as the best-selling single expression of a whiskey product. Although the Arnett resignation is the first time I’ve noticed it in a press release, my Jack Daniel’s contact says they’ve been using it for “some time,” relying on the IWSR research. Wasn’t there a big announcement, I asked? Apparently not, my contact said. “We typically don’t tout something like that directly, so I’m not surprised that there wasn’t a big announcement.”

Is Jack Daniel’s the #1 selling whiskey in the world? By that single-expression standard, yes. If you consider the brand as a whole, no. According to industry publication The Spirits Business, Jack Daniel’s sold 13.4 million cases in 2019, Johnnie Walker sold 18.4 million.

The Spirits Business does a cute trick. Jack Daniel’s is #1 on their “World Whisky” list, which excludes the products of Scotland. Johnnie Walker is #1 on their “Scotch Whisky” list. But they also show the numbers. Neither brand has moved very much since 2014, with each growing by about a million cases.

If you merge the two lists it goes like this. Johnnie is first, Jack is second, Jim Beam is third, Ballantine’s Scotch is fourth and other blended scotches round out the top ten. An American whiskey, Maker’s Mark, slips back in at number 12.