Master Distiller Jim Rutledge has five decades in the bourbon business, so you can easily say whiskey flows through his veins.

Starting at Seagram in 1966, he retired as master distiller for the famed Four Roses Bourbon brand after 49 years back in 2015. That retirement lasted about a week. “You know what they say about if you love what you’re doing, you’ll never work a day in your life. I know it to be,” he quipped in a recent interview with The Whiskey Wash.

Friends, former colleagues, and other wise investors in the whiskey business came knocking on Jim’s door as word spread of his retirement. He said he had the first call four hours after his retirement was announced, asking if he would like to have the master distiller job at another distillery.

Jim was soon over at Castle & Key Distillery, doing contract distillation for several customers, while working with his partners on their own J.W. Rutledge Distillery plans and reviving the heritage brand Cream of Kentucky.

Some of that work slowed down due to Covid-19, but Jim sure didn’t. He was blending and distilling. Helping different groups put whiskey inventories away, with bourbon distilled at Castle and Key, as they are speculating on the bourbon market three, four, five years from now. 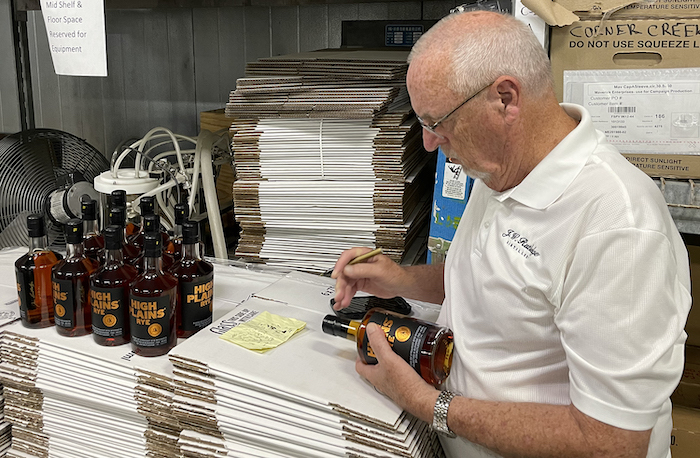 It’s a regular bourbon renaissance and Jim said the market is seeing short supply of the spirit. In his 49 years with Seagram/Four Roses, Jim said once in 1997, Seagram (who owned Four Roses) had him make a short run of straight rye, to supplement the rye whiskey distilled at Seagram’s Lawrenceburg, Indiana distillery (now MGP.)

The production of rye whiskey helped pique his interest in one day distilling rye whiskey for a straight rye brand.

When Seagram went out of the beverage alcohol business at the end of 2001, the Kirin Brewery group purchased Four Roses and the new owners preferred to keep just to bourbon whiskey. Kirin was not interested in rye.

It later became kind of a running joke, when people attending various events held at Four Roses would always ask ‘Jim, when are you going to run some rye?’ He would respond, “I don’t think that will happen any time soon.”

Today, Jim and his team of three partners are fundraising and looking to break ground on the J.W. Rutledge Distillery by the end of the year. And this summer, he’s finally put his special touches on that rye whiskey he had been dreaming of for nearly 25 years.

“Bourbon was getting hard to find, so we started to look at rye. What are they producing in other states around the country? We thought, ‘hey, multi-state blends of straight rye, that’s a good idea.’ That’s where we came up with the first production of our already trademarked High Plains brand,” Jim said.

Jim said that each straight whiskey used in High Plains Rye has its own unique recipe, varying from 51 percent rye grain to 100 percent rye, and each with a unique yeast strain. The result, he said, is a distinct flavor profile that clocks in at 97 proof.

“We had some folks in, blind tasting the rye, and they found it to taste considerably older than a four year old,” he said.

He knows quite a bit about the blending, particularly working with various yeast strains. Starting work with Seagram in the post-prohibition era, Jim said it was “the most quality conscious company I’ve ever been a part of” and that it was the first whiskey company to install a research and development team, post Prohibition.

“Back then, Seagram had five distilleries in Kentucky. Even though each did everything the same, every distillery had its own flavor profile. Whether it be the water, the air, the barrels. As you know, no two barrels are the same. But everything Seagram did was to achieve consistency.”

The research and development among those five distilleries led to the discovery of tens of thousands of yeast strains. More than 3,000 of those strains Seagram retained in their library.

Jim said by the mid-1980s, Seagram had consolidated its Kentucky distilleries down to the one that Four Roses calls home today. In the `40s, `50s, `60’s, they would use up to 10 bourbon flavor profiles from the five distilleries to generate consistency in their bottled bourbons.

Four additional yeast strains were acquired by Four Roses, from Seagram corporate quality and R&D, to be combined with their two mashbills to achieve the same level of quality consistency, and that’s how the tried and true formulas such as OBSO, OESV, OESF, etc. were developed. (The second character, B and E, represents the mashbill, and the last character, V, K, O, F, and Q, represents the yeast code).

It was the strive for consistency that made bourbon better, Jim said.

“Really, the way to achieve quality is consistency,” he said. “Yes, no two barrels are the same. And while it’s impossible to achieve perfection, you always try to get there.”

Jim recalled that in the old days of the bourbon industry, if a flow rate in the distillation process needed to be adjusted, someone would have to adjust a valve manually, and this could take 30 or more minutes to get the rate just right.

Today, a computer will make the adjustment in an instant; thereby, enhancing the quality of production.

However, he noted, computers cannot replace the ‘art’ of the distillation process, when a master distiller uses his or her organoleptic senses to know if a “fermenter’ is right or if the aroma of corn is good, or not.

“That’s the fun part of being a distiller,” he said. “Using one’s senses of sight, taste, smell and touch in combination with today’s equipment in an ongoing effort to constantly improve product quality.”

As Jim and his team get closer to having their own distillery, they are building brands Cream of Kentucky and High Plains via sourced whiskeys. He said “every bottling run has been sold out prior to the first case rolling off the production line. However, the real fun will begin with the first distillation and the first barrel is filled and rolled into one of our rickhouses.

“One of the really nice things about being independent is that we can, and will, listen to our customers and consumers relative to what they would like to see us distilling, whether it be a high rye bourbon, a wheated bourbon, a straight rye, etc. Although perfection can never be achieved in the distillation process, we’ll never stop trying, and the fun of that challenge is what really keeps me going.”