Located in Peoria, Illinois, what is today known as JK Williams Distilling is noted as being that city’s oldest, continually operating distillery. Recently, it was bought by new owners Andy Faris and Stacy Shunk, who have started the journey of expanding the brand by releasing new whiskey at retail, as well as opening a 20,000 square foot warehouse and production facility.

“This production facility is the first step in creating an experience for JK Williams Distilling, but we have much more planned for the near future,” said Faris in a prepared statement. “Peoria was once the Whiskey of the Capital of the World, and our namesake, J.K. Williams, was a bootician and Prohibition legend. 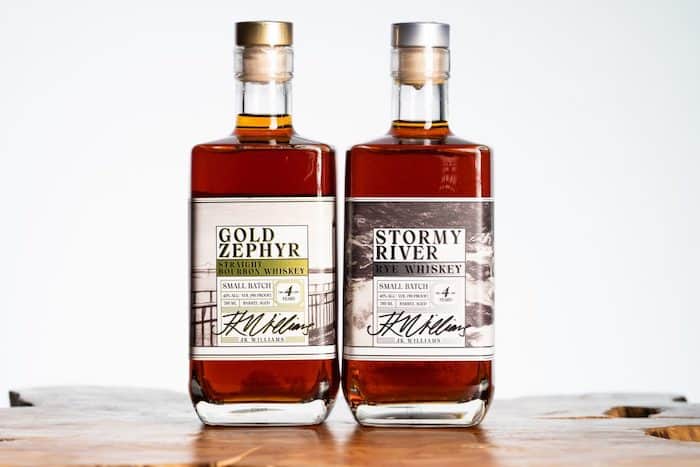 “We’re excited to revive not only the brand but the culture of whiskey production in the area.”

The brand traces its roots back to J.K Williams, said to be a bootlegging, prohibition legend who made whiskey “from the quality grains and plentiful water source of the Peoria region.” His century old recipe reportedly passed down the family line through descendants.

The first releases from the newly-owned distillery tap into prohibition-dated recipes and are being overseen by new team member and veteran distiller Jeff Murphy from Lake Charles, Louisiana. Murphy has worked with brands such as Rebecca Creek Whiskey and Bayou Rum..

Gold Zephyr Straight Bourbon Whiskey, one of the new offerings, is aged in small batches for four years and presented at 90 proof. It has official taste notes of dark cherries, light tobacco, and honeysuckle with a long and warm finish of oak tannins and hints of berries.

The new Stormy River High Rye Whiskey, meanwhile, is also a rich and flavorful 90 proof with “hints of spice balanced with apple blossom honey and a finish of dried, dark fruit.”

“Our initial releases are a nod to J.K.’s history of distilling fine whiskeys, but I look forward to expanding the portfolio to a wide range of spirits,” noted Murphy.

Both whiskeys will be available at select retailers in the Peoria and Central Illinois region at around $60 for the bourbon, and around $66 for the rye. They will also be available for purchase at the brand new, salvaged and repurposed JK Williams warehouse, formerly a laundry facility.