Making whiskey make a difference, the team at Copperworks Distilling Co. in Washington State turned to whiskey in their inventory maturing in barrels that previously held Kentucky bourbon.

They created Copperworks Kentucky Tornado Relief American Single Malt Whiskey, and proceeds from the sale will go to the relief fund for tornado victims.

To achieve the flavor profile they were after, Copperworks blended that ex-Kentucky bourbon cask of whiskey with whiskey that had been matured in a new American oak cask (cask no. 270, in honor of the area code for western Kentucky). Both barrels held whiskey distilled from Copperworks Pale Malt recipe and were aged for a minimum of 45 months, said Copperworks Distilling Co. co-owner and president Jason Parker. 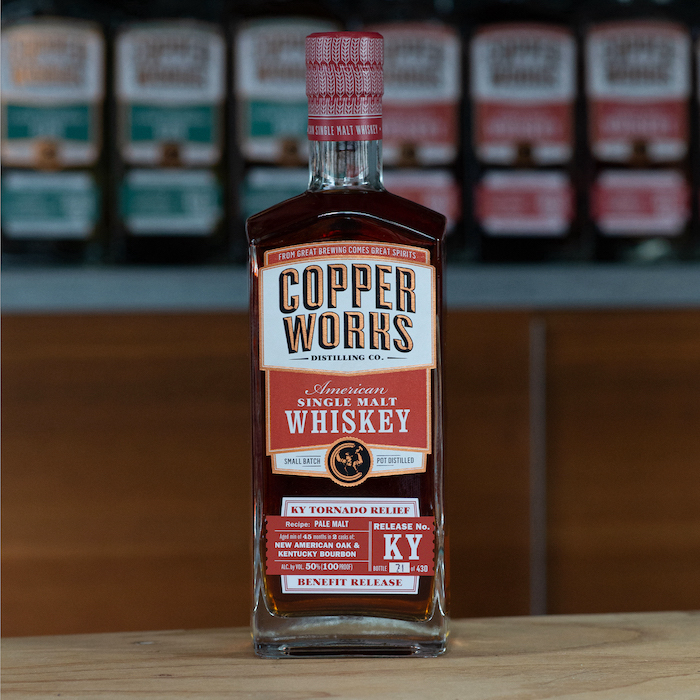 “We’re pleased to draw upon the heritage and flavors of Kentucky bourbon for this important release,” Parker said in a prepared statement. “It was critical to me that everything about our relief efforts honored my home. This special benefit release is the first from Copperworks to use whiskey matured in a used Kentucky bourbon barrel.”

Maturing Copperworks whiskey in a used bourbon barrel allows the flavors of the malt to come through more since the barrel contributes less caramel and vanilla than new oak barrels do. Bourbon barrels also provide more spice notes due to their heavier char levels.

To provide donations to the relief fund as quickly as possible, Copperworks is offering the product for pre-sale now. To order, go to Copperworks Kentucky Tornado Relief American Single Malt Whiskey.

The whiskey will be available for shipment or pickup at the distillery in mid-January 2022. It will only be available directly from Copperworks Distilling through its online store, and in its tasting room on the downtown Seattle waterfront.