You want to judge a whiskey competition someday? Join the crowd. You’re one among many. Skipping work to judge dozens of unique spirits definitely makes for a good day.

You got an ax to grind because whiskeys winning double golds and whiskey of the year honors aren’t the ones you think deserve it? I get it. We all shake our heads sometimes at those.

All of us have the urge to pull back the curtain and see how these competitions are run. But accusations that they’re all rigged because too many ordinary bottles reach the top of the heap are questionable at best. 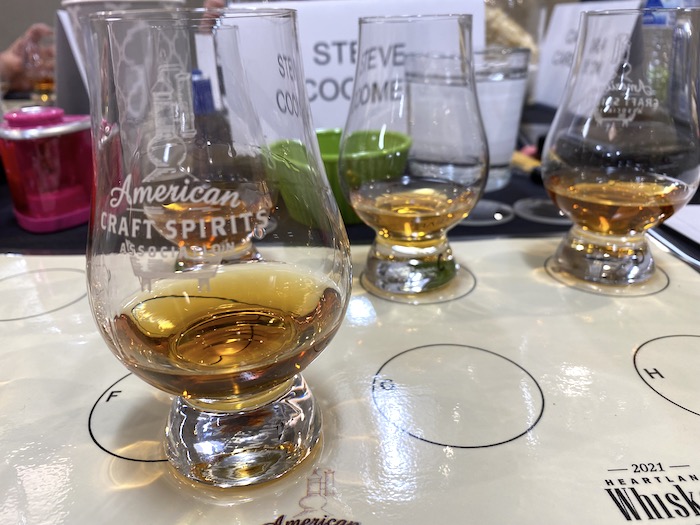 All are entitled to their opinions, and admittedly, mine is a three-ingredient cocktail made from each. While I’ll keep those proportions secret, I have to say that the recipe changed last week when I served as a judge for the American Craft Spirits Association’s annual competition. It was an eye-opening and affirming experience that gave me a new appreciation for its organizers—not to mention the palate fatigue that comes with the job.

I’ve judged lots of food and cocktail contests—some were terrific, others were digestive nightmares—but this was the most significant spirits-centric event I’ve done to date. Event organizer Chris Montana, a craft distiller himself, spent nearly a half hour explaining the rules of the contest and how judges should score fairly. He also explained the ethos of this contest in a way that reminded us of the gravitas implied: When you’ve been chosen to judge others’ work as bad, good or great—and say precisely why—the pressure is on to do it fairly.

The process isn’t rocket science, but it’s work for the organizers. Logically, judges stayed in one room and the spirits poured and organized for each table’s flights came from another. Naturally, judges couldn’t enter the room where the spirits were held.

Flights of specific spirits in different categories were wheeled out on a cart and distributed to each table of judges. Not every table tasted every spirit or category; no amount of sipping and spitting would allow enough time or liver for that.

Critiques and suggestions ranged from, “consider bottling at lower proof,” or “higher proof might add complexity,” or “very dark and astringent for 2 years old; small barrel likely and not good.” Praise was typical of most whiskey reviews: “The nose and palate aligned nicely,” or “surprisingly complexity at only 80 proof! I’d buy this bottle.”

Among the three whiskey writers at the table, none was foolish enough to advise on distilling. At our table, though, was a retired plant manager from a famous Kentucky distillery, who shared his technical suggestions aloud. He was one of several industry-savvy judges at the contest, people who approached their pours like the scientists and experienced manufacturers they are. Hearing their comments was an education; I’d do it again just to take notes.

What intrigued me was how rarely all four judges at our table agreed on a single spirit. (Those we agreed on received either great or bad scores.) Usually, three judges agreed and the other dissented—and the outlier changed with nearly every fresh flight of pours. Judges whose scores were opposite mine for the first few rounds mysteriously moved toward agreement in other rounds before separating again without explanation.

The competition concluded when judges were invited to the spirits room to see the winning bottles (results will be released later this year) and all other entries. The sheer number of spirits entered was astonishing, but as ACSA president Margie Lehrman reminded us, “there are at least 2,250 craft distilleries in the United States, so this is only a small part of what’s out there.” I recognized some brands, but not all. It was a learning experience to have tried somewhere between 50 and 60 new spirits that day and know there are thousands more. That’s exciting.

On the way home after the contest, my wife and I picked up some new private barrel releases I’d been privy to help pick. Having worked a long day without a drop, she was ready for a drink. And thinking the 90 minutes that had passed without a sip might leave me craving some whiskey, I poured one and joined her. I was wrong. My palate was beaten into submission. Even the well-made bourbon I’d chosen moved across my tongue like cloth. The remainder returned to the bottle.

Despite the dry-mouthed results, I liked judging that contest. I appreciated the organizers showing us who won immediately after we finished. Once we’d seen them, it would be impossible to change those outcomes. I don’t know what happens at other contests, especially far larger events accepting more entries and organizing more judges, but I’ve always doubted the murmurings about malfeasance. Coverups rarely work when so many people are involved. But you gotta admit, some of those winners do make you think, “Seriously? They chose that?” From now on, I’ll just enjoy the mystery of those results.