1,000 Craft Distilleries – and Counting! – Now Operating in the USA

If you’re reading The Whiskey Wash, odds are good you’re familiar with the whiskey aisle at your local retailer. So you’ve probably noticed that the shelves are looking a little crowded these days. Beginning as a small-scale phenomenon confined to the wine-producing regions of the West Coast, craft spirits brands began to debut on a national scale in the early 2000s. Today, they’re skyrocketing in number and popularity, occupying more shelf space and elbowing in on national brands’ market share.

Every single state in the nation now boasts at least one craft distillery, and many are home to dozens. The growth has been remarkable, and according to Michael Kinstlick, CEO of Coppersea Distilling, it’s not going to slow down anytime soon.

This week at the American Distilling Institute’s annual conference, Kinstlick presented a white paper detailing craft distilling’s meteoric rise. The number of current Distilled Spirits Permits – the federal permit required to lawfully operate a distillery – has grown from 560 in 2010 to 1,825 in 2016. In 2015 alone, almost 400 DSPs were issued, a rate of more than one per day. As of 2016, more than 1,000 craft distilleries are now operating in the United States, exponential growth in an industry that was virtually nonexistent 15 years ago. 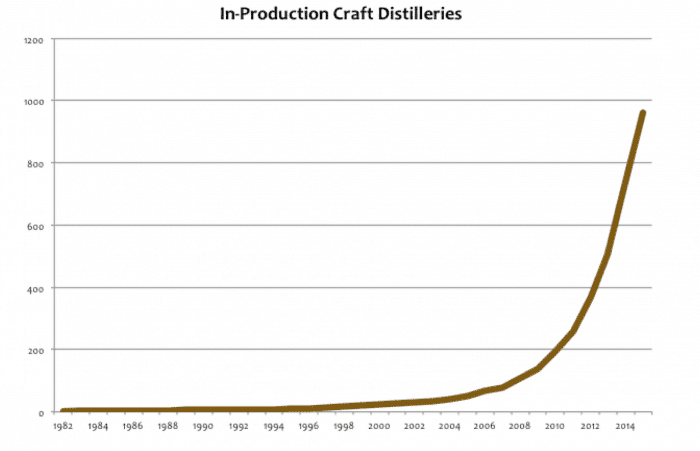 Craft whiskey overtook vodka as the single largest craft category sometime in the early 2010’s, and its share is continuing to grow. Today, approximately 60% of all craft distilleries sell at least one whiskey expression. Kinstlick suggests that figure may be even higher in actuality, since it does not count distilleries producing whiskey but waiting for their stock to age before releasing a product. 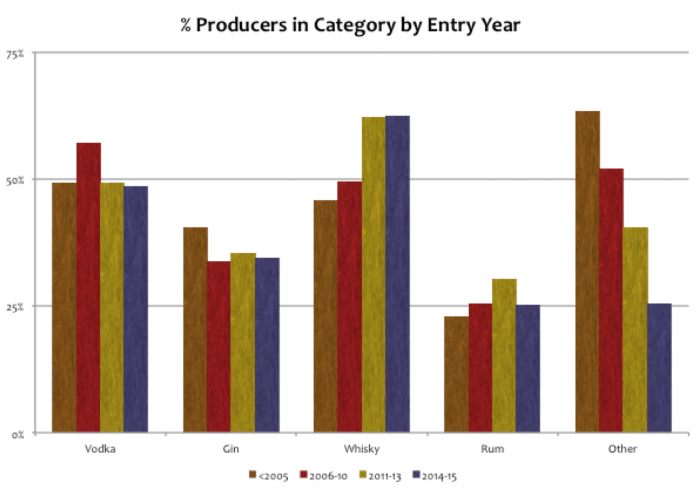 What does this incredible growth mean for the craft industry? Kinstlick sees continued expansion on the horizon – and that expansion means more competition. His white paper concludes:

The Craft Distilling market is no longer in its infancy. The pioneers of the 90’s and 00’s yielded to the explosion in new entrants over the past few years. And now we are seeing some of those entrants departing. The next phase of the market will see increasing numbers of exits, even as the number of new entrants continues to grow.

The dynamics of consumer demand and the prior examples of farm wineries and craft brewers suggest that the Craft Distilling market is far from saturation. However, the days of bottling GNS-based vodka and calling yourself “The First Distillery in Which-Where County Since Prohibition” may be over. Knowledgeable consumers are seeking truly local products with panache and differentiation.

While the next several years might be challenging for upstart distillers, we consumers only stand to benefit. Competitive pressures will reward craft whiskey distillers producing truly delicious products, a dynamic poised to make navigating the craft section of the whisky aisle even more fun.