The weather is warming up finally and I’m excited for warm days and frosty cold drinks to come again. I’m often surprised by the number of people who say they don’t drink whiskey in the warmer months. Did someone insist they have a glass of warm Scotch on a hot summer’s day? It’s just a weird notion to me that you wouldn’t drink whiskey all year round. There are a ton of amazing warm weather whiskey drinks, the Julep being one of my favorites.

For me, there is nothing better than a cocktail that is both refreshing and packs a good punch. The Julep is about as simple as it gets. It’s basically a whole lotta Bourbon, and some sugar, with mint for that extra cooling factor.  Typically the mint gets muddled in the drink, but I’ve seen recipes that don’t even do that, so the mint just gets relegated to a garnish. Either way you prep it, it’s a strong and refreshing drink. The fact that it’s served over a giant mound of crushed ice really seals the deal when the temperatures are climbing.

For my twist on the classic, I wanted to use a spring ingredient that not only makes this cocktail a pretty color, but gives it some bright and tangy flavors. With its tart zip, Rhubarb fits the bill perfectly. Plus, there is Rhubarb everywhere in the stores right now and I adore its flavor. The season for it is only a few months long, so I like to get as much of it as I can and make it into syrups, shrubs, liqueurs, etc. so that I can stretch out the gloriousness of its flavors.

With Derby Day right around the corner, I figured I’d share a zippy variation on the official drink of the Kentucky Derby. And what more fitting bourbon to use than the official bourbon of the Kentucky Derby, Woodford Reserve. Rather than using the standard Woodford, I opted for the Woodford Reserve Wheat Whiskey for its fruity and somewhat floral nose, and its spicy, minty tasting notes.  This is a fruit-forward take on the Julep, and a refreshing variation on the standard Derby Day tipple. Hope you’ll throw on your fancy hats, and stir this one up at home! 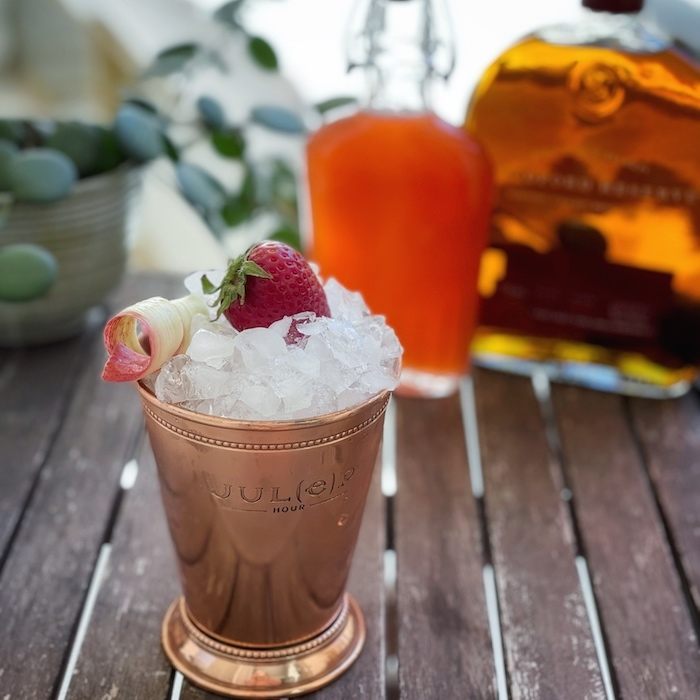 Add syrup to the bottom of your pre-chilled glass, or Julep Cup. Add crushed ice to glass. Pour Bourbon over top and stir briskly until the glass frosts over. Add more ice to form a mound on top, add a straw. Garnish with a rhubarb peel and a strawberry.

Chop Rhubarb into 1/4 inch pieces and add them to a pot with the sugar and water. Cut off Strawberry tops and slice in halves (quarters if they are particularly large). Bring everything to a boil. Stir well and turn the mix down to simmer. Continue to stir for a few minutes. You want the fruit to release its color as much as possible, so the stirring helps incorporate the flavors, but mostly it helps the skin release from the stalk of the Rhubarb so that the color permeates the syrup fully. Remove from heat and let rest. Strain out the solids and store liquid in an airtight container for up to a month in the fridge. I like to keep the solids and use them as fruit spread on toast or over some vanilla ice cream.