The season is upon us, and I’ve always really liked the flavors in eggnog. The spices in it remind me of chai, and many of the same spices can also be found in pumpkin pie. All delicious food and beverage items, in my opinion. That said, dairy is no bueno for my digestive system, and drinking eggnog always leads to a sad affair afterwards for me. So, to avoid having to evacuate the proverbial dancefloor after consumption of said nog, I decided I would attempt to make one that did not contain dairy, but was every bit as rich and creamy as the traditional stuff.

I did some searching online for various diary-free recipes. Now, I’m not a vegan, and the eggs don’t bother me, but I figured it would be a fun challenge to try to make a dense and creamy drink without using dairy or eggs. In my day to day life, I’ve taken to using nut milks in my coffee or in most recipes that call for milk, but they work best in things that don’t need to be creamy, where you’re really just looking for a wet ingredient that has a bit of weight to it, instead of water. If you want to add a creamy texture to something that calls for dairy, I have found the best bet to be coconut cream. It’s definitely got a coconutty taste to it, so it can be a bit tough in things that are more savory, but for a nog, it’s a perfect replacement for the dairy. But then, there’s the eggs. Eggs are much harder to find a replacement for. 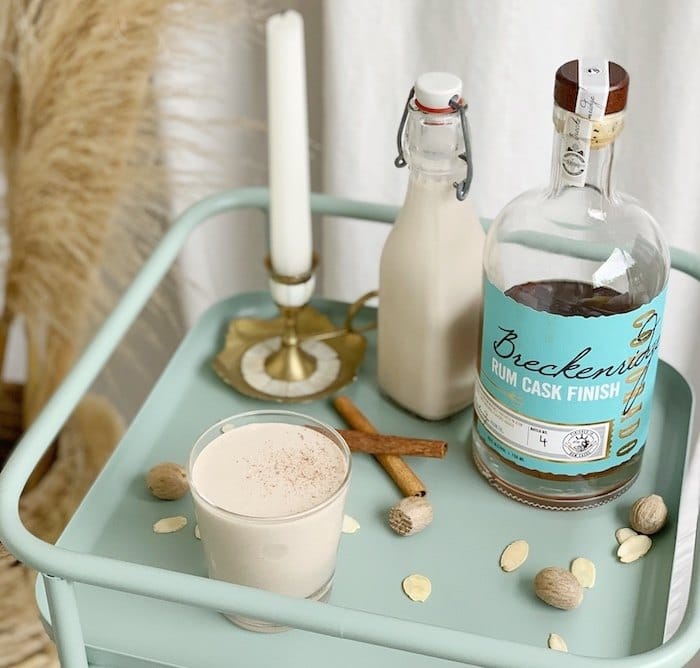 In baking, you will often see yogurt, or buttermilk as egg replacements, but that’s still dairy, so that wasn’t gonna work. Sometimes you also see tofu, but I’m sensitive to soy, so that wasn’t an option. Other recipes call for banana as a replacement, but that seemed like it would lead to an overly sweet finished product. Finally, I thought about all the nut milks that I use at home, and most of them have a combination of nuts in them to help thicken them up, which made me think about using a nut butter. What if using a nut butter added the right amount of density, fat, and texture to the nog?

The first batch I made, I tried using macadamia nuts. I was actually really excited about this because I love macadamias. What I didn’t think about, however, is that macadamias have a really pronounced flavor. So the first batch ended up tasting like spiced macadamia nut drink. It was tasty, and the right color, but it was not anything like a nog. Then, I thought about the fact that almond milk was pretty much the go-to for non-dairy milk alternatives until oats came along (sadly, I’m also allergic to oats), so it made sense to try almond butter for the second batch. Almonds are much less aggressive with their flavor, and despite the color of the nog being a bit darker, the taste of the nog was pretty spot on, and the texture was velvety and thick like a traditional dairy nog should be.

And since you typically see nog with rum or brandy in it, I wanted to use a whiskey that employed the use of one of those spirits in the finishing process. I ended up choosing the Breckenridge Rum Cask Finished Bourbon, which was released earlier this year by the distillery out in Colorado. They use their high-rye bourbon and finish it in casks that have previously held their spiced rum, so the spice characteristics are really interesting, and a great option for adding to a nog.

There was a little trial and error involved in this endeavor, but I had fun working out the kinks so that those of you out there with the need for non-dairy goodness could also enjoy some nog this season. Aside from the stove-top heating process, this nog is super quick to make and I’m really pleased with how it turned out.

Add all ingredients except bourbon to a blender. Blend on high until mixture is fully incorporated. Add the mixture to a saucepan over medium heat and whisk constantly until just at boiling. The mixture will thicken as it comes to a boil. Remove from the heat and whisk in the bourbon. Let sit to cool and transfer to a bottle or other airtight container. Keep refrigerated. Add to a cup and sprinkle some spices on top before serving. Add ice to thin out your drink if you like, or warm it up in a saucepan for a warm winter sipper.

18
Shares
2.1k
Views
Share on FacebookShare on TwitterGet Our Newsletter
Get The Glenlivet 18 Year Old at ReserveBar. Shop now!