This new Space Whiskey is a 90 proof sip that was created using an even blend of two bourbons distilled in Indiana—one in 2012 and the second in 2015—that were stored in traditional white oak barrels with a #2 char. The unfiltered whiskey was then bottled by Lost Republic, a distillery based in Healdsburg, California that has been up and running since 2013. Official tasting notes are below. 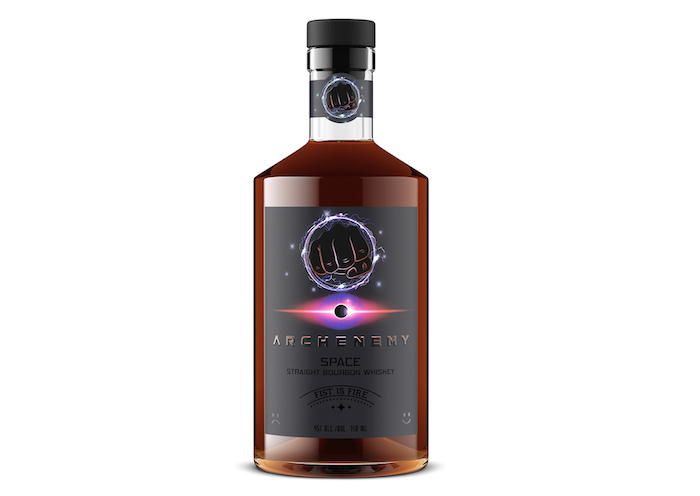 “Everything we do is with the Legion M community of fans and creatives in mind,” Legion M co-founder and CEO Paul Scanlan said, in a prepared statement. “It seemed like a logical next step to bring the Space Whiskey from Archenemy to life. We wanted the flavor of this bourbon to pack a powerful punch, channeling the cosmic themes of the film to create a blend that seems otherworldly.”

If you’re unfamiliar with Legion M, it is a fan-owned entertainment studio that crowdfunds film and TV projects from a pool of more than 25,000 investors. In addition to Archenemy, the studio has had a hand in the creation of recent cult favorites like Mandy and the comedy/sci-fi film Colossal. This new whiskey release isn’t the first time Legion M has brought to life something featured in one of its films. In 2020, they brought out Cheddar Goblin Mac & Cheese, a product that played a small role in the feverish horror film Mandy.

The 90 proof Archenemy Space Whiskey is available to purchase online through select retailers.

The nose has a woody oak aroma with dark raspberries and clove notes. The palate is full of vanilla, caramel, toffee and a clove/cinnamon punch. The finish is lingering butterscotch with cinnamon and spearmint.

30
Shares
536
Views
Share on FacebookShare on TwitterGet Our Newsletter
Cheers to the Dads! Personalize a bottle of his favorite whiskey to create a modern gift for the modern man. Use code: FATHERSDAY20 for $20 off your next order of $100 or more at ReserveBar