Editor’s Note: These whiskies were provided to us as review samples by Brown Forman. This in no way, per our editorial policies, influenced the final outcome of these reviews. It should also be noted that by clicking the buy links our site receives a small referral payment which helps to support, but not influence, our editorial and other costs.

The GlenDronach has released the 18th iteration of its Cask Bottling Batch series. The four casks chosen were hand-selected by the distillery’s Master Blender, Dr. Rachel Barrie. Dr. Barrie has over 26 years of experience, and she joined The GlenDronach, BenRiach, and Glenglassaugh distilleries in 2017. She is using her talents to cultivate the future of whisky.

The GlenDronach Cask Bottling Batch 18 consists of four bottles from 1993, 1994, 2005, and 2008. This year’s release celebrates the distillery’s mastery and showcases the richly sherried Highland single malt. The casks used are puncheons that once held Oloroso or Pedro Ximénez sherry, and Port pipes.

What I love about this series is the specific vintages offered. It is always nice to find a bottle to commemorate a special occasion. The GlenDronach Cask Bottling Batch 18 not only highlights the effects of sherry finishing, but it also maintains the classic characteristics that make the Highland single malt The GlenDronach. The collection brings a sense of nostalgia. Each bottle stands out on its own, yet they all form a cohesive collection. 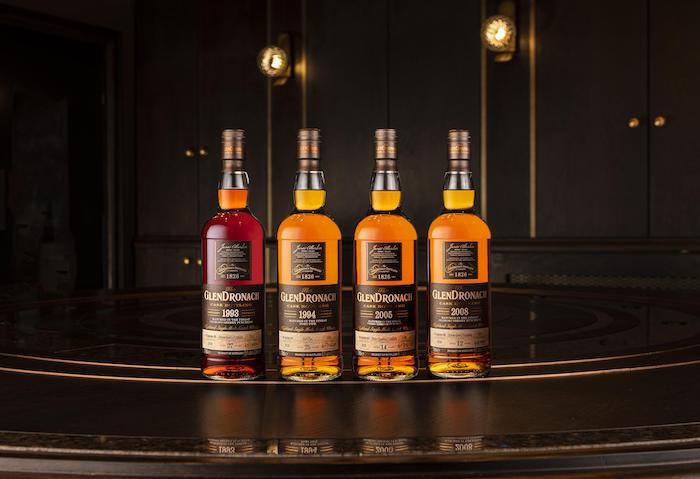 Nose: Rich and syrupy raisin immediately hits the nostrils. There is a heavy touch of cedar oil. Marzipan provides a sweet and nutty aroma in the background. Sitting in the middle of the dram is ripe banana. Lingering in at the end is the smell of loose pipe tobacco.

Palate: Right away you get the likes of a big bowl of Raisin Bran and warm cinnamon buns with vanilla glaze. Brown sugar, or molasses, provides the sweetness. Tobacco leaf hangs out in the background until cigar ash surprises the tongue on the finish.

Final Thoughts: I was five years old in 1993 and living on a lake in The Pas, Manitoba. The 1993 in The GlenDronach Cask Bottling Batch 18 series is a classic representation of the whisky. Out of the collection I rank it second, but would buy it in a heartbeat. The whisky is balanced, and the Oloroso sherry impacts the whisky in a big way.

Nose: At the start of the nosing, I pick up on cocoa powder. Fresh garden mint follows up behind. The dram then moves into the sweet realm with vanilla macaron and honey. Raisin and espresso find their way to the nostrils at the end.

Palate: The whiskey is purely reminiscent of eating honey right off the comb. The garden mint from the nose adds a refreshing quality. Espresso and coffee grounds find themselves in the middle. The tongue gets wrapped in tobacco and leather near the finish as it gets sooty.

Final Thoughts: In 1994, I was in Texas performing the Macarena with my friends in front of our class. The GlenDronach 1994 balances masculine and feminine flavors. I still recommend it even though it ties for third place with the 2005 expression.

Palate: The 2005 is spicy like a rye with nutmeg and cinnamon. Pipe tobacco melds with honey. Leather hits the back of the throat and sides of the mouth for the finish.

Final Thoughts: I was a junior in high school, and everyday after school I watched Casablanca as I did my homework. While The GlenDronach 2005 ties in third place for me with the 1994, it is the hottest on the palate due to the combination of ABV and baking spices. The heat mellows with water and still maintains the quality of the whisky.

Nose: Syrupy raisin is pronounced initially. Nutmeg and clove mix with tobacco almost like a Djarum. Milk chocolate comes through near the end.

Palate: The 2008 spices things up with white peppercorn and ginger. It is sweet in a subdued way, however it is the Madagascar vanilla that stands out. In the middle is a combination of oak, leather, and cigar. The finish is sooty with cigar ash.

Final Thoughts: In 2008, I was a sophomore in university, and thought I was a badass smoking Djarum Blacks and cigars at parties. As soon as The GlenDronach 2008 hit my tongue, this memory came flooding back. Out of the collection, this whisky is number one. The palate is a little bolder. I prefer the leather and cigar that comes out, but the vanilla really shines.