Editor’s Note: These whiskies were provided to us as review samples by Aberfeldy. This in no way, per our editorial policies, influenced the final outcome of this review. It should also be noted that by clicking the buy link towards the bottom of this review our site receives a small referral payment which helps to support, but not influence, our editorial and other costs.

Dewar’s, like a classic television show, is a longtime staple in the world of whisky. Although Dewar’s has been a major producer of blended whisky for centuries, John Dewar’s sons had bigger plans. In 1896, the foundation for a new distillery was laid, and two years later production began at Aberfeldy.

Aberfeldy is the only distillery built by the Dewar family that specifically makes Scotch whisky (today, however, Dewar’s the company owns several Scotch whisky distilleries). Aberfeldie lies in the heart of the Highlands near the Pitilie Burn. This small river that runs into the River Tay is rich with gold that is panned to this day. Like the gold in the water, Aberfeldy is partnering with local beekeepers in conservation efforts to save the honeybees.

Unlike some sample packs, the Aberfeldy range is fully available, so be sure to check if it’s in a location near you. Dewar’s and soda is one of my go-to’s, and as I found out, the Aberfeldy is the perfect upgrade. I did buy some local honey to try the Golden Dram, and I recommend it. 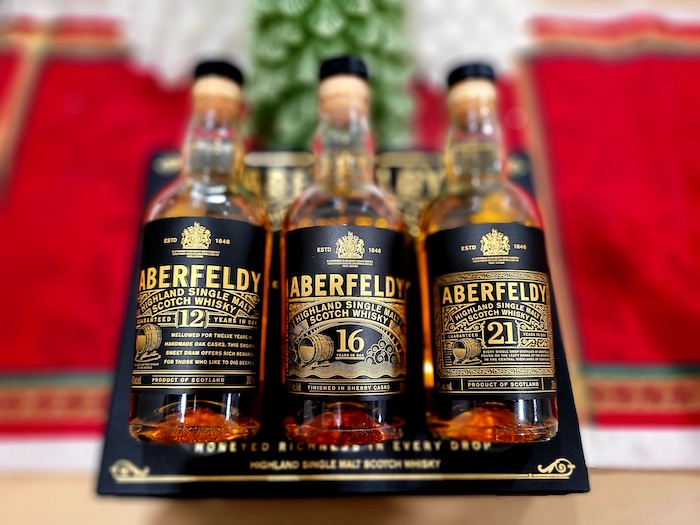 Nose: The nose is light and delicate with jasmine and rose at the forefront. A touch of orange oil comes through underneath while the rest of the nose is filled with porridge. The sweet aroma found in the dram is reminiscent of simple syrup.

Palate: The mouthfeel is light— almost watery. Trying to discern any flavor is a hard task with this whisky. It’s easy to drink, but there is no distinct flavor. There is a hint of honey, a hint of oak, and a hint of porridge, but overall there is no wow factor. Black pepper is delivered at the end of the dram.

Nose: There is a slightly noticeable aroma of nail polish at the beginning but lingers in the background. Apricot and orange peel mingle like jam on toast. Brown sugar provides sweetness on the nose.

Palate: The whisky drinks hotter than the 12-Year-Old even though they have the same ABV. It tastes malty with oak, however, the combination reminds me of toast. Lots of orange peel and orange segment comes through. The whisky is mellow with its sweetness. Apricot and baking spices meet in the middle. A touch of jasmine stays on the tongue after the finish.

Final Thoughts: More flavorful than the Aberfeldy 12-Year-Old, the 16-year-old whisky is lovely for sipping. Bourbon drinkers and Scotch drinkers alike will be left wanting more, but I would use this as an introduction to newcomers in the whisky realm.

Nose: Caramel and vanilla are rich and greet the nose first. A touch of baby powder comes from behind. Overall, the nose is pleasantly balanced with florals and fruit.

Palate: Orange peel and clove touch the taste buds first. This is followed up with grain and just a bit of oak. Despite the aromatic nose, the palate of the whisky is lackluster.

Final Thoughts: It has fruit and spice, but overall the whisky is middle of the road flavor-wise. The 21-year-old is easy to drink and would make a good old fashioned, even if the grain is overpowering.

Nose: Bright green apple and pear dusted with cinnamon starts the nose off. It reminds me of Jolly Rancher hard candies but more luscious. A slight tone of nail polish fills in the middle.

Palate: Apple pie. The whisky tastes like apple pie. It is robust with green apple and spicy with nutmeg and cinnamon. A hint of clove lingers on the backend. Crisp and flaky pastry crust defines the malted barley compared to the other whiskies.

Final Thoughts: Alas, although the Aberfeldy 18-Year-Old is not a part of the Aberfeldy Tasting Collection, it is the Aberfeldy I can get behind. The three percent increase in ABV expresses the flavor, which I don’t think gets across in the collection with all the same ABV.